This is a beautiful example of the 190SL. We love the Signal Red with black leather. But the original owner of 53 years and $100,000 restoration sets this example apart from the rest.

We are pleased to offer this beautifully restored 1961 Mercedes-Benz 190SL that was cherished by its first owner for 53 years.  Its second owner spent over $100,000 restoring what was a pristine original car to nearly showroom condition.  This is a roadster that can be immediately shown at concours events as well as toured in rallies worldwide.  This example is a numbers matching, correctly restored 190SL.

This 190SL was purchased new at Dan Gillum Motors in Reno, Nevada on April 15, 1961 by Dayton J. McDonald, DDS.   Dr. McDonald lived through the decades of his ownership in Sparks, NV where the Mercedes was kept in a very dry environment.  Dr. McDonald and his wife enjoyed the 190SL for the next 53 years.  It was kept as a pristine original car, never having seen rust or a hard life.

By 2014, the car was then sold to Ms. Eve Patton.  Ms. Patton was a serious car enthusiast who has participated in a host of vintage rallies, including the Mille Miglia.  Ms. Patton retained noted collector car appraiser Steve Linden to appraise the car and he stated that it was one of the best original 190SLs he had ever seen.  Following her acquisition of the roadster, she commenced a complete restoration that exceeded $100,000.  The detailed invoices and paperwork are all documented in the extensive binder.

The livery on this 190SL was refinished in Signal Red and remains in excellent, showroom condition.  The repaint was performed by Aventura Motors in 2016 at a cost of $38,000.  We love Signal Red on Mercedes roadsters.  This also includes both convertible tops, the Black Haartz cloth convertible top as well as a thoroughly restored black hardtop that really completes the look.   The chrome and stainless are also in showroom condition.

The interior has been all restored and looks terrific in its black leather contrasted with ample amounts of chrome, stainless and Signal Red painted trim.  Together it looks timeless and classic.  The interior work was all performed by Timeless Classic Auto.  The work is excellent and only normal minor use is evident on the leather.

The engine compartment is beautifully detailed for show.  The engine and mechanical restoration was performed by SL Auto Haus in 2015.  The photos in the photo gallery show the quality of the work.  The roadster has had little mileage added since the restoration work.  There is little patina evident throughout this Mercedes.

It is rare to find a 190SL roadster that was cared for by its original owner for 53 years in the dry climate of Reno, NV.  Its rarer for the example to be in the stunning combination of Signal Red with black leather, two tops and full restored.

For more details and information, please call, email or text Harry Clark at +1.602.245.7200 or sales@classicpromenade.com.  The 190SL is available for viewing in NYC, NY. 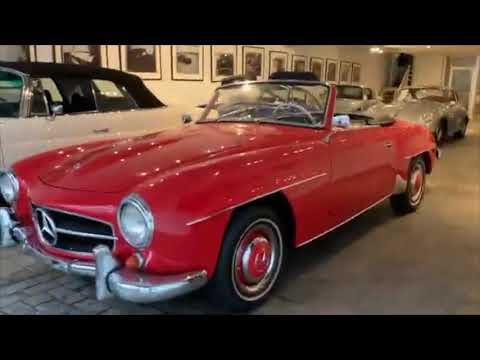 Good morning, Barry. Thank you for your comment. Yes, this is a numbers matching example. We’ll update the description.

Is this a numbers matching car? It does not mention that in the description.