This is a tough one for me. It's my first ever Radford Bentley. I looked for 30 years! It was ordered new by an amazing man. But it has rust!! Ouch!

This is a rare opportunity to find a 1957 Bentley S1 Standard Steel Saloon with all the Harold Radford Coachbuilders Countryman modifications.  This was ordered new by one of most affluent men in the world who was serving as the US Ambassador to the United Kingdom, having the car delivered new to the US Embassy.  It is rare for us to offer a motorcar that needs work, but this Bentley will be a worthwhile project because of its provenance and Radford Countryman modifications.

This Bentley was ordered new by John Hay “Jock” Whitney, who was one of the Whitney family members.  Mr. Whitney was the publisher of the New York Herald Tribune, President of the Museum of Modern Art and the US Ambassador to the UK.  By 1930, he was one of the wealthiest men in the world and in 1946 he founded JH Whitney, the oldest venture capital firm in the US.

Ambassador Whitney ordered this Bentley to be delivered to the US Embassy in London by February 24th, 1957.  It was special ordered with 8:1 compression, the rear seat lowered by one inch and power steering.

More importantly perhaps, this Bentley was sent to Harold Radford Coachbuilders to have the Countryman modifications made to the interior.   This includes two full cocktail requisite cabinets to the back of the front seats, and a variety of additional storage cabinets in the doors, a secretary compartment for note pads, pens and other items and, importantly, the ability to fold the front seat completely flat allowing for a nearly queen size beds for the afternoon nap in the country.

The interior of this Bentley is very nice with newer soft and supple red leather throughout, complimented by red carpet with red leather banding along the edges.  The wood is in good condition, but certainly not for show.  While all of the Radford compartments are there, the accoutrement are missing and would have to be sourced.  Frankly, sourcing the items is not all that difficult as they were not Rolls-Royce or Bentley branded items.  The hard part is to find a Radford Countryman!!

The exterior is a two town Masons black with gray metallic.  The paint and body are substandard for our standards, but it looks impressive and stately.  The chrome is mostly very nice and presentable as-is.  The bigger challenge is that this Bentley has rust in many of the body panels that will need attention.  The areas around the rocker panels and the lower sections of the fenders are bubbling.  Being from Arizona, we just don’t see this and are ill equipped to deal with it.  The windows are tinted for privacy and to help keep the interior cool during summer months.

Mechanically, we have performed over $10,000 worth of service and repair to make sure this is a mechanically solid Bentley.  Refer to the inspection report, but most everything works as it should, the air conditioning blows cold and the car is nice to drive.  The file for the Bentley has a substantial additional amount of service and repairs performed under prior ownership, totaling about $28,000.

The Bentley has its spare and a few of the tools.  It is missing many of the large and small tools and does not include the handbook.  It does come with an electronic service workbook.

For more details, please call, text or email Harry Clark at +1.602.245.7200 or harry@classicpromenade.com.  The Bentley is in our showroom in Phoenix. 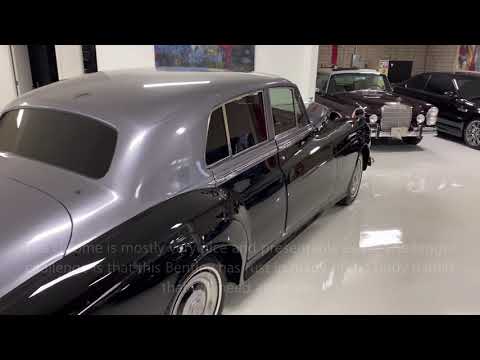 Thanks for the information!

Cy Conrad has many of the Radford accessories, many of which are new in the box. He knows the items well and can help fit the car out. I can make a connection to the buyer. Harry