This is such an exciting and special car. The Chrysler Special Coupes by Ghia are some of the most brilliant designs of the era.

Complete photos, videos, and inspection report available at www.ClassicPromenade.com.  It’s free to bid and only takes minutes to register.

Classic Promenade is pleased to offer on behalf of its Southern California owner this stunning 1953 Chrysler Special Ghia.   Having been owned by our friend and client for the past 41 years, this has been a significant feature of his collection of important motorcars.  This is one of about 16 Chrysler Special coupes that were hand-built in Torino, Italy by Carrozzeria Ghia (production of these hand-built cars are not well documented).  These Chrysler Specials were show stoppers at the time of their introduction and were reserved for celebrities the world over.

This Chrysler Ghia has never been restored and has been incredibly well preserved by its owner, having amassed a total of 58,000 km (33,000 miles).  This Ghia was sold new in 1953 to the famous jockey Johnny Longden by France Motors in Paris.  Records indicate that by September 1953 Mr. Longden booked passage of the Ghia on board the SS Liberte.  He then registered it to his residential address in Arcadia, California.

Later in the 1950’s, it was owned by a woman in the affluent neighborhood of San Marino, California.  Under her ownership, the Ghia had received supplemental bumpers to protect the hand formed front and rear end features of the car for her suburban use.  Holes are still present where these additional bumpers had been mounted.

By 1960, the Ghia was acquired by a well-known Chrysler collector and authority, Robert Frumkin of Los Angeles.  Mr. Frumkin received a handwritten letter from Mr. Longden confirming the Ghia’s provenance as well as the original color combination of gray over maroon.  Mr. Frumkin retained ownership of the Ghia for two decades.

In 1979, this Ghia was acquired by our friend and client.  He has a wonderful collection of largely preserved cars that he has enjoyed for decades.  This Ghia has rarely ever been seen in public.

The livery of this Ghia is in an elegant Dove Gray.  The paint has a patina of originality, but it was presumably repainted long ago.  The chrome and stainless are all original and show well for 67 years of age.  We love the smooth and sexy lines that are timeless.  It is a truly impressive car no matter what angle its viewed from.

The interior is also very original, with the maroon leather seats and carpet having been redone at some point.  The rest of the interior appears to be in overall nice condition.  The interior is absolutely stunning in its design and execution.

The heart of the engine compartment is the venerable Chrysler 331 CID hemi V8.  The engine fires up willingly and sounds terrific through the dual exhausts. The motor has a 1954 4-barrel carburetor, though the original carburetor is also included. The Ghia has the Fluid-Matic automatic transmission that is smooth and confident. This car also has a new power brake booster, but it has not been installed. Sitting behind the wheel is quite a thrill.  It is obvious that this car was a design statement.

This Ghia is a largely original car that has been maintained in its present form for the past four decades.  Whether kept as a preservation example or used as the basis of an easy restoration, this is an incredibly rare opportunity to acquire an iconic motorcar.

For more details and information, please call or text Harry Clark at +1.602.245.7200 or email us at harry@classicpromenade.com.  The Ghia remains with its owner in the Los Angeles area. 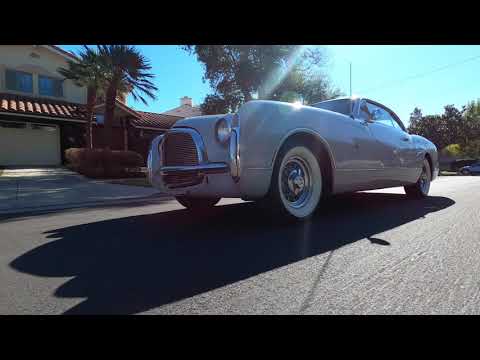