This is probably the lowest millage C1 Corvettes in existence. The historical significance of this car is huge, and is an absolute must for any serious Corvette collector.

ONLINE ONLY AUCTION at www.classicpromenade.com.  Chevrolet only made 300 Corvettes in 1953. Of these, this is one of the most important in extant. This Corvette is believed to be the lowest original mileage example in existence. It has had three owners from new, a mere 5,800 documented original miles and was restored and owned for over 50 years by the noted Corvette authority, Lyle Hill. And to top it off, this has achieved the coveted NCRS Top-Flight Award status. It simply doesn’t get much better than this!

The 1953 Corvette was the sensation of the GM Motorama which took the US by storm. Designed by the renowned Harley Earl team of engineers and designers, it was a ground breaking design that is the DNA basis of todays Corvette.

This Corvette has an almost idyllic provenance with three owners from new. Lyle Hill was 20 years old when he acquired No.087 from Gerald White in Orrville, Ohio on May 21, 1962. It was used by Mr. Hill for four years and then was largely stored, awaiting restoration. In the interim, Mr. Hill became a well known Corvette authority and was also known as a source for rare and hard to come by parts. Nearly four decades later, Mr. Hill had No. 087 restored by many of the top resources for Corvettes for the 50th anniversary celebration of Corvette in 2003 in Flint, MI. Mr. Hill passed in 2014 and No.087 found a new caretaker in its third and present owner. The current owner enhanced the restoration even further by hiring noted Corvette restorers Rex Marshall of Bountiful, Utah with supervision by Corey Peterson. The quality and authenticity of the restoration garnered 96.6 points and NCRS Top-Flight status, the pinnacle of Corvette judging.

Cosmetically, No.087 is beautiful in its correct and nearly perfect livery of Polo White. The body finish has the correct fiber and seams showing throughout and it is as authentic as they come. The chrome is excellent and of top quality throughout. The Corvette has its correct bias ply tires, red painted wheels and the correct factory two-eared spinner hubcaps. The exterior quality of restoration is excellent in all regards, The paint and body preparation was done by John Salvio from Astoria, NY. Understanding that the finish work on the 1953’s were not up to todays standards for mirror-like finished fiberglass. Both the panel fit and body finish is representative of the technology available to GM in 1953.

The interior of No.087 is terrific and finished to concours standards. The interior and black convertible canvas top was done by John Kennedy from Bountiful, UT. John was the long time technical advisor for tops and interiors for the national NCRS. The Sportsman Red vinyl interior is complimented with its correct two-tone white and red dashboard. The dashboard has gorgeous design cues, with ample chrome bezels surrounding the round gauges and tachometer and the V’d design for the speedometer and radio speakers. The red carpeting is beautifully fitted through the passenger compartment. It has its black canvas convertible top in its storage compartment.

The engine compartment is also in excellent condition visually, with the beautifully detailed 235 CID “Blue Flame” straight six-cylinder engine and its triple Carter carburetors. We love the rumble of the engine from its chromed dual exhaust tips that are stylistically exiting the body in line with the rear bumper. We recommend you look through the photo gallery to see the detailed photos of the engine compartment and its accessories. GM’s venerable two-speed Powerglide automatic transmission is used to supply the power to the rear wheels. The drivetrain is believed to be the original from new.

Our detailed inspection revealed that the tachometer is not functioning at present and it is missing its cigarette lighter. All other mechanical and accessory items work and function well.

For more information and details, please call, email or text Harry Clark at +1.602.245.7200 or sales@classicpromenade.com  The Corvette is able to be viewed in our showroom in Phoenix, AZ. 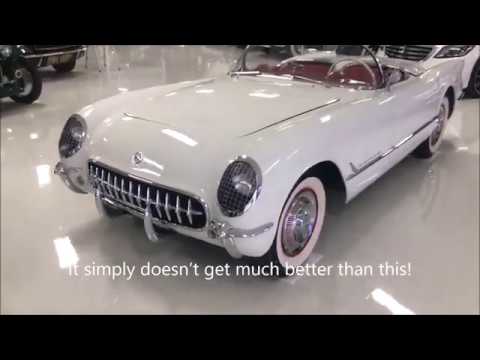 this is my dream car!