Clive Cussler was a bit of a hero to me. I read all of his books and his characters influenced both the types of cars I collected and how they were displayed. This Packard is an iconic Post War Packard woody and is an exceptional example.

This is a gorgeous example of a fully restored 1949 Packard Eight Station Sedan (Woodie) that has won numerous first place awards and was a longtime rust-free California car.  This Packard was bought and enjoyed by the world renowned bestselling author Clive Cussler, who enjoyed it along with his wife and family for several years.  It is now being sold on behalf of the Janet Cussler Collection in Scottsdale, Arizona.

This Packard benefitted with an exceptional nut-and-bolt restoration.  Nothing was overlooked and no short cuts were taken.  Starting with a local California, rust-free example, this restoration is of such quality that it garnered numerous first place awards.  The quality of the finishes are exemplary in every regard.  This is also a very well optioned example, with the rare overdrive, radio, heater and sun visor.

The livery is finished in a concours quality Spruce Green Metallic (Paint Code D) and is complimented by beautifully finished maple and ash wood.  The paint is nearly perfect today with only a couple of very small chips in areas that see significant use (the hood and drivers door jamb).  It is beautifully polished with no orange peel or other issues.  The chrome, as mentioned earlier, is fantastic and is absolutely of concours quality.  The wood shows several years of use, but has recently been touched up to make it both beautiful and serviceable for use.

The interior is finished with beautiful brown leather that is in concours condition and is very well done.  The leather choice is both elegant and correct for the model.  The wood painted trim on the inside is done beautifully as well.  The chrome on the inside is also done to concours standards and is excellent.  The gauges and trim are also done very well and the correct black rubber floor mats look as new.  The headliner is finished in a beige vinyl and is tight and also looks as new.  The beautiful cargo area is finished in wood with stainless steel rails and is in concours condition with the exception of a small area of separation on the tailgate.

The venerable straight eight 288 CID five main bearing engine has 135 bhp and the power is transmitted through the three-speed with overdrive transmission.  The overdrive is a rare option for the junior series Packard and a very important option for cars that will be toured and driven as it makes it capable of touring at modern highway speeds.

The 22nd series Packard station sedans were the only Post War woodies offered by Packard.  They were based on the six cylinder 120-inch wheelbase sedan bodies that were then shipped to the Briggs Manufacturing Company to be converted to the woodie wagons.  The Packard was one of the first steel framed station wagons built, where the wood is not structural but rather more aesthetic.  Over a nearly three year production period only 3,900 were built.

For more information and details, please call, text or email Harry Clark at +1.602.245.7200 or harry@classicpromenade.com.  The Packard is in our showroom in Phoenix, AZ. 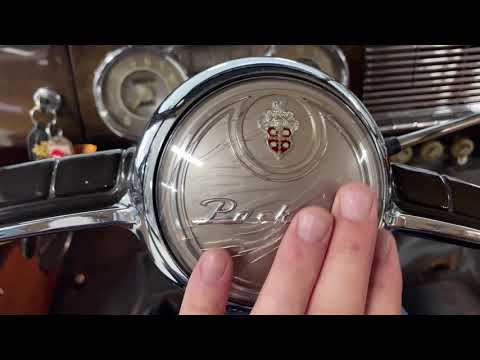 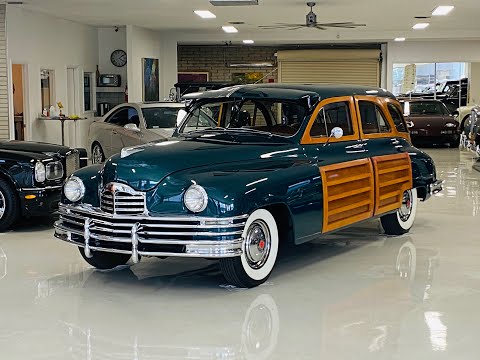 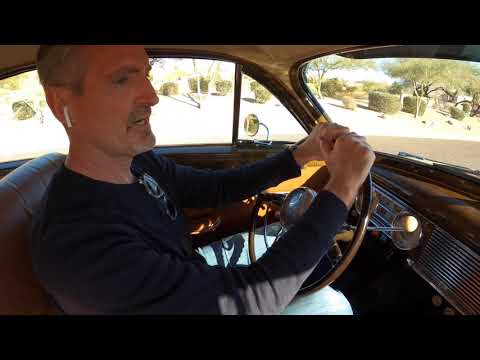 We just completed a drive with the Station Sedan and verified that it drops into overdrive in both second and third gears.

Update: We have uploaded photos of this Packard up on our lift. The pictures show a beautifully clean, spotless undercarriage. Please scroll to the end of the photo reel, or click the “Show More Photos” button and see pictures at the end of the slide deck.