The term “Shooting Brake” is the traditional British term for what Americans call an estate wagon, depot hack, station wagon or “woodie”. The Shooting Brake was developed initially in the 1890’s as a horse-drawn utility vehicle to load up your dogs, guns and friends and travel through the estate to go hunting. Or more precisely, to take a “break” from the day and go “shooting”.

SELLING AT NO RESERVE!!  ONLINE ONLY AUCTION at www.classicpromenade.com. We are excited to offer this rare 1926 Rolls-Royce Phantom I Shooting Brake that was honored with a Best-in-Class award at the 2019 Amelia Island Concours d’Elegance. It has benefited from a largely sympathetically restoration of an “original” shooting brake that is stunning to see and experience. As is the case with nearly all shooting brakes from the 1920’s and 1930’s, 57NC was rebodied sometime after 1934. 57NC has been given the name Victoria by its long-time caretaker of approximately 65 years.

The dark green paint of the cowl and bonnet is complemented by its black fenders and black painted wire wheels. The dark livery is punctuated with chrome lights, mirrors, trafficators, the iconic Rolls grill and a broad collection of handles, hinges and rivets. Installed on the drivers side is a large hunting spot light. And of course, the wooden body is massive and beautiful. She is extremely solid, belying its age and storied history. The wood has been refinished regularly over the years and is in very nice condition. Overall, Victoria exhibits a perfectly consistent patina that makes it a sensation anywhere it is seen. Let us be clear though, the chrome is mostly exhibiting scratches, wear or some pitting, but it looks just right on 57NC.

Victoria comes complete with newer beautiful tan leather interior and tan carpeting. The leather is soft and supple and wonderful to touch. It feels like your grandfathers favorite leather chair or jacket. In the back, a rear facing period folding bench is positioned to hold a few additional shooters, with ample room for a couple of dogs as well. Positioned behind the bench is the rifle rack for the shotguns. We love the fold down tailgate that turns into a table for the picnic lunch. There is also an awning system and two period shotguns (with firing pins removed) which make the display a sight to see.

The dashboard could benefit from refinishing, as the varnish is peeling. It is replete with enough instruments and gauges to fill the cockpit of an airplane, including a barometer.

Chassis 57NC was ordered new on December 17, 1926 by Mrs. A.T. Ellis to receive double cabriolet coachwork by Gills, designed to carry six people and four pieces of luggage. This was built with the long wheelbase of 149″ and the “C” specification steering rake. Mrs. Ellis was from Bexhill-on-Sea. Sir Fredrick Radcliffe of London acquired 57NC on the 13th of August, 1932. Its next owner was G.W. Gardner, Esq from Chelmsford, Essex who acquired it on the 28th of May, 1934. And the Commander T. Wooley of Fairford, England was the last owner of 57NC, before it was exported to the USA.

Mr. Kenneth Godden bought 57NC from the Commander and exported it to San Francisco, California in the mid-1950’s. It’s understood that Mr. Godden found 57NC while serving in the military in the UK shortly after the Korean War. Mr. Godden had registered 57NC in the RROC directory from 1978 until 2014. At one point, Mr. Godden moved from Navato, CA to Austin, TX and loaded up his family and drove the shooting brake to make the journey. He recounted the story that while on the drive through the Mojave Desert he and Victoria saved several cars from overheating, while the Rolls never missed a beat!

Mr. Godden sold Victoria to the present owner in approximately 2014. The present owners have enjoyed Victoria on ranches in Texas and have displayed her at various Rolls-Royce and concours events, including the aforementioned First in Class win at the 2019 Amelia Island Concours d’Elegance. She has recently benefited from significant mechanical servicing, including a completely new and rebuilt clutch assembly, rebuilding of the carburetor and fuel delivery system, and major a major tune up. She now drives very well and passed our inspection process, ensuring that it is safe and should prove to be reliable in the tradition of Rolls-Royce. Victoria is still in her prime and ready to enjoy, much to the delight of the crowds that gawk at her proportions and lines.

For more details and information, or to schedule a live video inspection, call or text Harry Clark at +1.602.245.7200 or email us at harry@classicpromenade.com. Victoria is available for viewing at our Phoenix, AZ showroom. 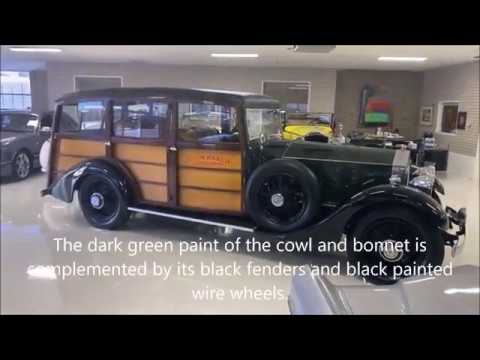 Congratulations zebradaisy! This is Shooting Brake is a real beauty. Someone from our team will be reaching out to you shortly with next steps.