SOLD!! Off to Virginia!!! This is a fully upgraded 1,200 mile 2007 Ford Mustang Shelby GT500 that has been cared for by its original owner. When new, he had over $20,000 worth of upgrades made to the car by the North Scottsdale, Arizona dealership where he bought it, Power Ford. We have all the detailed receipts for the upgrades. So this is no stock GT500. This delivers 700 hp to the wheels!!

This GT500 is in showroom condition today. The paint is without scratches, dings, dents, etc. The tip of the front spoiler has a slight abrasion from some speed bump or driveway entrance. The interior is perfect. As a matter of fact, and I kid you not, the interior still has the new car smell to this day!! Look at the photos closely. It is pristine. You will not find a nicer example. And the passenger visor is signed by Carroll Shelby himself!!

And we love the black paint with silver accents and stripes. The owner also had the windows tinted to make it so you’ll find privacy when you want it (or need it) and this includes the windshield!!!

In 2008, the owner returned the GT500 to the dealer and had several upgrades performed. These include installing a JLT Carbon Fiber Intake Kit with the X3 flash tuner, Metco Supercharger pullys and a Steena heat exchanger. But he didn’t stop there. Also added were JBA silver ceramic headers and a new high performance exhaust system. And by the way, not only did it crank the horses up to 700 at the rear wheels, it sounds incredible! For looks and performance, he also purchased and installed factory Super Snake 20″ wheels, front and rear and high performance Nitto radials. Everything was done without regard to costs. It was to be the best.

We love the short throw shifter, making for fast and crisp shifts through the gears. And if you get bored (unlikely), it has the navigation and entertainment system that was factory installed. This GT500 is fully serviced and ready to enjoy. And as an added bonus, all the original parts, wheels and accessories come with the purchase of this Shelby.

ABOUT THE GT500
Shelby and Ford collaborated for the 2007 model year to bring back the return of the Shelby GT500. Introduced at the 2005 New York International Auto Show, the GT500 uses a supercharged and intercooled Modular 5.4 L; 330.0 cu in V8 engine rated in stock form at 500 hp at 6,000 rpm and 480 lb⋅ft at 4,500 rpm of torque (this is a 700 hp upgraded example). The power is transferred to the rear wheels through the Tremec TR-6060 6-speed manual transmission, suspension tuning, a body kit, and in stock form 18 inch wheels (ours has been upgraded to the Snake 20″ wheels).

For more details or information, call or text Harry Clark at +1.602.245.7200 or email us at harry@classicpromenade.com. The GT500 is in our Phoenix, AZ showroom for inspection. But don’t delay, we only have one. 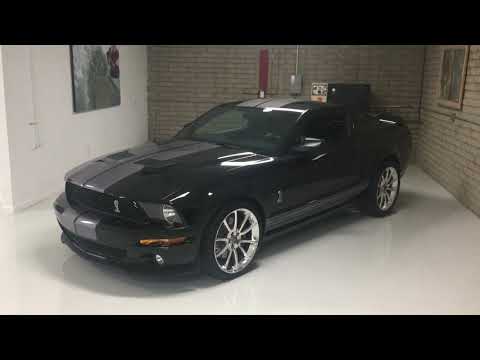