We are proud to offer this beautiful 2003 Harley-Davidson Softail Deuce 100th Anniversary Gold Key Edition (FXSTD) Motorcycle. With only 2,889 original miles and one owner since new, this bike is essentially brand new!

Did you know? A softail is a motorcycle with its rear suspension springs or shock absorbers located out of direct view, so as to look like a hard-tail motorcycle, and that the word softail is a registered trademark of Harley-Davidson, coined for the FXST Softail in 1984.

In fact, Bill Davis, an avid Harley rider and engineer from St. Louis, Missouri, designed the softail in the mid-1970s. Since then, Harley-Davidson has build a wide variety of softails, including the Deuce, which you see here. The year 2003 was the centennial anniversary for Harley, and such, this is an c edition, complete with a golden key!

Cosmetically, the sleek chrome front end could hang in an art gallery. The tank is long with a beautiful, sculpted chrome console. The dragster-inspired rear fender is as original as it is clean. Reflector-optic bullet turn signals match the chrome bullet headlight perfectly.

Mechanically, the 1450cc Twin Cam 88B is balanced, black powder coated and chrome covered engine runs and sounds as great as it looks! While the Vance & Hines Exhaust really gives this bike some personality, without being overbearing. Everything on this Harley works exactly as it should.

So whats the catch? Well, as you may or may not know, we here at Classic Promenade are all about transparency and disclosure on our vehicles. To be honest though, we couldn’t find anything wrong. There is a very mild amount of wear and some dirt in the really tight crevasses of the bike, as well as under the underside. But with only 2,800 miles and most of it’s life parked in a garage, there isn’t much that could have gone wrong!

Overall, this Harley is in outstanding condition. It comes complete with 3 sets of keys, all the original books and manuals, as well as the original exhaust and headlight (now has an HID upgrade). This bike will not disappoint!

For more information or to schedule a viewing at our Phoenix Showroom, contact Daniel at +1.917.890.4230 or at daniel@classicpromenade.com 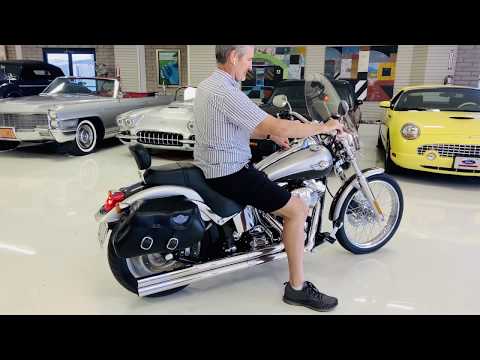