I was fortunate enough to buy a 1998 Continental R Mulliner wide body new, back in the day. What a car! This is just about as close as you can get. The Continental T will absolutely be an appreciating collector car.

This is an exciting 1997 Bentley Continental T that has accumulated 50,000 miles with two previous owners in California and Florida.  This is one of only 91 produced in 1997 in left hand drive configuration hand-built by Mulliner Park Ward.  Selling new for $325,000, these were the ultimate hand-built gentleman’s grand touring car.  This is an example with no accidents, documented history and well maintained from new.  Motor Trend magazine proclaimed the Continental T to be “the baddest luxury car ever created”

This Continental T was custom ordered by Bentley of Newport Beach.  Leaving the factory on the 6th of December 1996 and sailing from England on the Majestic Maersk, this Continental T arrived in Los Angeles on the 1st of January 1997.  His first owner was Jim Pollock of Rancho Mirage.  Jim enjoyed the Bentley until April 9th of 2003, when it was acquired by its second owner.  He enjoyed the Bentley for about a year and a half.  It is said that he was part of the France NASCAR empire in Florida.  It’s third and last owner was Christopher Sullivan from Somis, CA who acquired the Bentley on December 23, 2004 with 16,497 miles accumulated.  Mr. Sullivan used the Bentley as a daily driver for 18 years faithfully maintaining it will Bentley dealers and specialists.  The Bentley now has just over 50,000 miles from new.

The livery is original and gorgeous in its Black Emerald Mica (Paint Code 9540021).  The paint is beautiful, looking black in the shade or evening while reflecting a dark green metallic in the direct sunlight.  The wide body configuration is sleek and sexy and looks masculine at any angle.  The custom 20-inch chrome wheels make it look even more contemporary and aggressive while making it handle much better than your normal Continental T.  The Red B center caps are correct Bentley specification and look great.  The chrome matrix grill is a timeless classic that is still used today.  Overall, the exterior is nearly perfect with only one very small bubble below a rear quarter window and a very small chip in the windshield on the edge of the passenger side.

The interior was custom ordered with Continental R seating in Soft Tan and Sandstone two tone.  The leather is all original and in very nice condition.  We touched up the dye on the driver’s seat and custom ordered two-toned chubby steering wheel.  The steering wheel feels terrific and natural in your hands.  Most Continental T’s were ordered with the engine-turned aluminum integrated on the dash and door caps.  This was custom specified to have all straight grained mahogany, which we have never before seen.  It is a striking look that really reinforces this as a gentleman’s grand tourer rather than a muscle car.

The mahogany wood is all in near perfect condition throughout, attesting to the care that this Bentley has received throughout its life.  The door cap railings all have red winged “B” emblems integrated.  Of course, the red starter button and turbo-boost gauge are in the center console.  An updated Pioneer stereo and navigation system has been added.  The Black carpeting has Sandstone binding and are covered with the original sheepskin mouton overlays, including a black mouton overlay covering the carpeting in the trunk!!  The previous owner did not use the overlays leaving them in excellent condition, while the carpeting underneath show wear in specific areas.

The engine compartment is well detailed and almost looks new.  The 400 hp V8 produces massive torque with a top speed of 155 mph.  This Bentley performs as you would expect, shooting off like a freight train.  Being well maintained, the radials are new in the rear and nearly new in the front.  Everything works as it should save for the driver’s seat is intermittent when adjusting it.

We love the optional town and country two toned horns.  This Bentley has its original owners’ manuals, extra alarm remote, tools, jack and spare.  The NADA Value is $100,300 and we have this priced to sell.

For more details and information, please call, text or email Harry Clark at +1.602.245.7200 or harry@classicpromenade.com.  This Bentley is in our showroom in Phoenix. 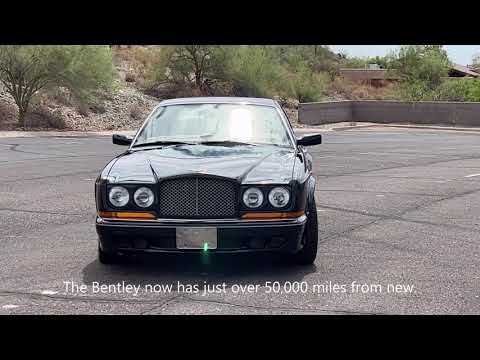 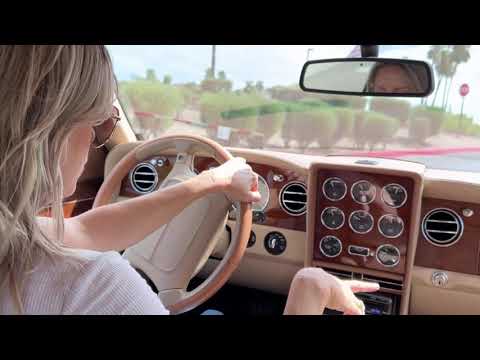 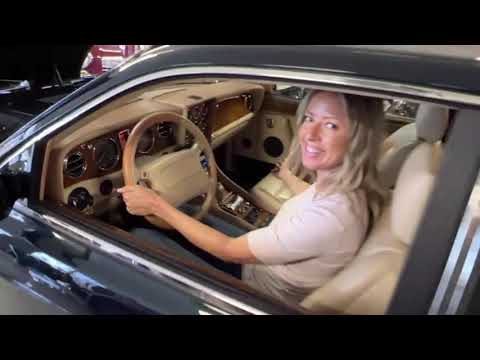 Interesting Fact: The Bentley Continental R is a luxurious vehicle that was manufactured from 1991 to 2003 by Bentley Motors in England. This model was the priciest, yet most powerful and high-performing Bentley of its day. This is the first Bentley where the body was not shared with a Rolls-Royce model, a trend that had…

Interesting Fact: The Bentley Continental R is a luxurious vehicle that was manufactured from 1991 to 2003 by Bentley Motors in England. This model was the priciest, yet most powerful and high-performing Bentley of its day.

A top speed of 145 mph with a 0-to-60 time of 6.6 seconds made the Bentley Continental R stand out from other vehicles. A condensed version of the Continental R known as the Continental T was released in 1996 that features an additional 15 horsepower and a sportier look by sacrificing rear passenger legroom. This model reduced the 0-to-60 time by .4 seconds and raised the top speed to 170 mph.

The EPA ended up classifying the Continental T as a subcompact car due to its shorter wheelbase and the compact interior. Another large difference between the Continental R and T was that the latter had chrome-finished instruments and aluminum trim as opposed to the wood finish on its predecessor.

Both the Bentley Continental R and T are still heavily sought-after models, and their performance holds up to cars being manufactured today!