This is a gorgeous example of a 1992 Rolls-Royce Corniche IV that has accumulated 10,500 miles from new.  The previous owner had enjoyed this Corniche for the past 18 years.  In white and magnolia two-tone livery, it is simply stunning.  Over the past 17 years of ownership, it has been serviced and maintained by marque specialists as well as Desert European, the local Rolls-Royce dealership in the Palm Springs valley.  This Corniche is in nearly new condition, inside and out, and may be the only two-tone Corniche IV ever made.  Reference: Rolls-Royce Corniche IV (rrsilvershadow.com)

This Corniche was ordered new by Sandra Adelson, the first wife of the late Sheldon Adelson, owner of the Las Vegas Sands empire.  Sandra and Sheldon had amassed an enormous fortune together, becoming two of the most affluent people in the world.  Ms. Adelson ordered the Corniche through Foreign Motors West of Natick, MA.  Ms. Adelson lived in her home in the exclusive Chestnut Hill area outside of Boston.  The Rolls was with Ms. Adelson until her death, when it soon thereafter was bought by its previous owner, Mr. Bill Walsh.  Mr. Walsh used the Corniche at his PGA West home in La Quinta, CA as an escape from his 28 dealerships in the Chicagoland area.  We sold the Corniche two years ago to its 95-year-old present owner who added about 100 miles during his stewardship.

This Rolls is one of the 219 Corniche IVs made in the four years from 1992 until 1995.  This is incredibly rare, and more so being in the stunning two-tone paint scheme and having accumulated a mere 10,500 miles since new.  The Corniche IVs benefitted from the latest engineering, including upgrades to the ABS braking system, a four-speed automatic, fully automatic convertible top and many other refinements.

The livery is beautiful in its original white (Code RR.9520090) and magnolia (Code RR.95.20093) with white double coach stripes.  The paint is stunning with its factory finish without orange peel and still looking as though it is new!  The stainless steel and chrome are overall in excellent condition, with only normal use shown via small fine scratches in the stainless steel.  The white Everflex convertible top is in excellent condition and the rear window is clear and also in great condition.  There are a few areas of staining on the convertible top (as shown in the photos), which is about the only blemish on this example.  Every part of the car reinforces that this has been faithfully garaged and cared for since new.

The white leather interior is complimented by magnolia piping and magnolia upper dash panel with triple tone wood veneer, including burl walnut, and two other contrasting veneers.  The leather is in overall excellent condition with very minimal wear shown on the drivers seat, which one would expect after 10,500 miles.  The leather is soft and supple and also shows that this Rolls has been loved and cared for.  The magnolia Wilton wool carpets are nearly as new and are covered by the original white mouton sheepskin overlays which are in very nice condition.

At auction, the Corniche IV has sold for as much as $360,000.  Reference Bonhams Auction Result 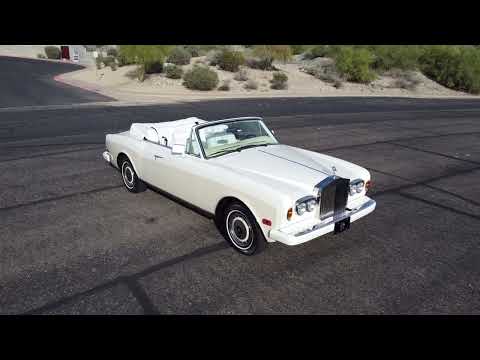 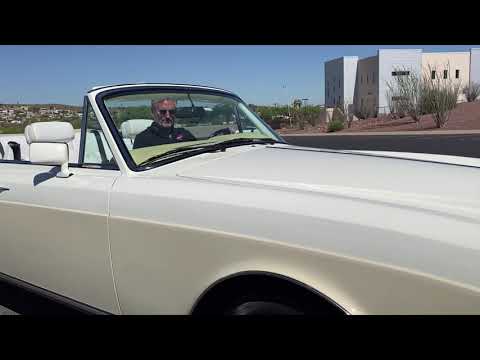 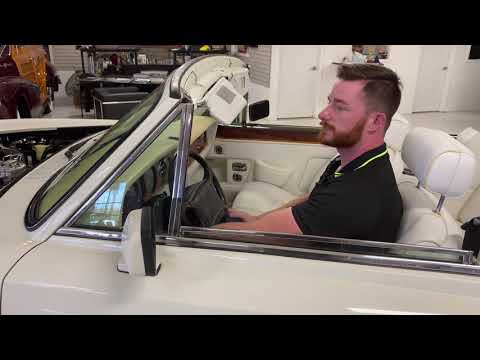 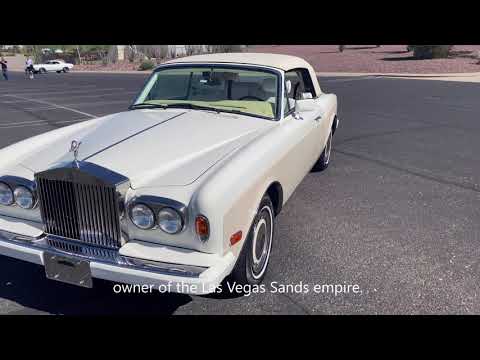