This is a well documented 1985 Rolls-Royce Silver Spur Limousine by Jankel that has covered a mere 63,000 miles since new. This Spur is classically elegant in its Masons Black (Paint Code 9500701) livery complimented with its matching Black Everflex roof (Trim Code DH5218). This Spur started life as a standard saloon on January 28, 1985. Five weeks later, it was shipped to Robert Jankel’s (official builder of 80’s era Rolls-Royce Limos) facility’s where it was lengthened by 42 inches and upgraded with a number of luxurious amenities.

By March 28, 1986, the limo conversion was completed and this Spur set sail for America. The long fabrication time on this car is a testament to the painstaking detail required for this largely hand-built car; only 9 examples were produced for the entire 1985 model year, and only 63 Silver Spur 42-inch limos were ever built in total!

This Spur was originally delivered to H&H Continental Motors in Hinsdale, IL, an authorized Rolls-Royce dealer in the Midwest. The first owner was a gentleman named R. Wayt who owned Chalet-Sports Core. There is substantial service and warranty documentation on this car, with all work having been conducted at Continental Motors.

According to Rolls-Royce Owner’s Club (RROC) records, a Mr. John Bertone, Jr. of Flushing, NY enjoyed this Rolls through the mid-1990’s. There is also documentation that a Mr. Archer Daniels of Midland CO. in Decatur, IL owned the Rolls from the early 2000’s until 2007.  At this point, the limo was acquired by Imports ltd of St. Louis. On June 14, 2007, the present owner purchased the Rolls and has owned and maintained it ever since, adding it to his private collection in Columbus, OH.

The all-original Masons Black paint looks looks good for the age, and has a deep shine with a simple two line accent pin stripe in Double Mushroom. The chrome has a nice shine with no oxidation. The windows are tinted as expected and the body lines look straight. The body was tested using a paint gauge and all readings were normal with no areas of body filler noted. Upon closer examination, the inspection revealed a few issues. The sunroof has been sealed all around the opening from the outside and it will not open. The Everflex (vinyl roof material) has bumps under the surface in several areas indicative of rust forming under the vinyl.

The interior is very nice overall. The Mushroom leather (VM 4136) with Black (PAC-3726) piping are without deep creases and are fairly supple. The Oatmeal headliner and Grey & Bound Black carpeting are all in overall very good condition for the age, with a normal level of wear. The woodwork, dashboard, and interior body panels are all said to be in good condition. Overall, the interior is clean and well-kept. The original Rolls-Royce thermos, crystal decanter set, and toolkit are all present and in good condition.

The mechanical inspection did not note any issues or areas of concern. Likewise, the current owner of this Spur reports the car to be problem free. All recent maintenance and servicing since the current owner’s time with the car have been conduced by Coach Built Motors, which is where the car is also being stored (in the photos). The owner mentioned that this Rolls does have a recently rebuilt GM heavy duty alternator. It was noted that the odometer and trip-odometer were not working at the time of inspection. Finally, a 1 mile test-drive of the car was conducted without issue.

It’s unusual and very special to see these Silver Spur limousines. As the current owner rightfully pointed out, many stretched wheelbase cars either become highly problematic or appear very dated after a short while. This Rolls is the exception to that rule. With so few ever made, and with this one in such good overall shape, this truly is a timeless buy for the unconventional collector.

For details and information, please call, email or text Tina Smith at
+1 (602) 730-1244 or sales@classicpromenade.com. The Spur is located in Columbus, OH.  Classic Promenade has not seen this car and the representations are from the owner and third parties. 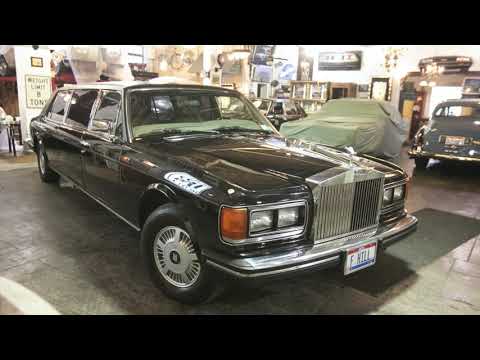 With an In op speed-o and rust forming under the landau top just what can this be worth?

Hi SPEED, thats a good question. A few recent sales comps we’ve on seen similar Silver Spur Limos were in the high $40k range, plus or minus. We would expect this Rolls to go for similar money.