This is a fully restored LM1 that is incredibly rare and desirable. This is a terrific compliment to an Italian auto collection.

Bill Haylock of “Bike” magazine wrote a glowing review of Moto Guzzi’s Le Mans in the August 1976 issue of the magazine: “The Le Mans just looks so goddam beautiful that if I was rich enough I’d buy two of them—one to ride and one just to stand in the living room to admire as an object d’art. It represents the ultimate in motorcycle styling as an art form—the synthesis between engineering and aesthetics in which the Italians are supreme.”  We love the alloy wheels, shaft drive and semi-gloss black exhausts as well as the funky 70’s embossed seating, all correct and exactly as they were sold when new.  This example even has the correct LM1 orange “safety stripe” on the fairing.

This particular LM1 is owned by a good client and friend of ours who purchased it and then commissioned the restoration by David Brown of DB Cycles in Lima, NY.  It was restored in January, 2016 and then decommissioned to be added to his substantial collection of Porsche motorcars and vintage bikes.  The LM1 is showing 14,705 miles on the odometer but has just a handful of miles since its complete restoration.  It had been owned since July 16, 1989 by Cari B Comart of Woodside, NY until acquired by Mr. Brown.

The heart of the LM1 is the 90 degree V twin that is still a hallmark of the bikes produced in Mandello del Lario.  The dual front cross-drilled rotors help ensure adequate stopping power.

For more information and details, please call, text or email Harry Clark at +1.602.245.7200 or sales@classicpromenade.com.  The LM1 is available for viewing at our Phoenix showroom. 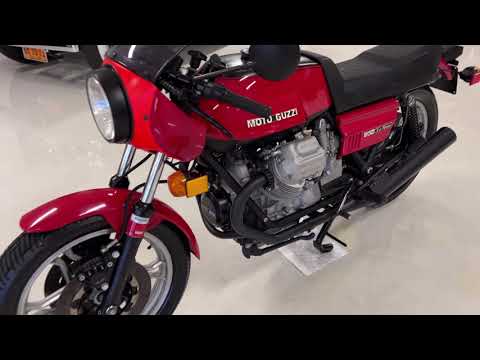