This bike is an absolute masterpiece as far as I'm concerned. Stylish, powerful, iconic. It's truly a classic.

Fun Fact: The Ducati 750 GT was the Italian company’s first road-going V-twin, or L-twin in Ducati speak as it more accurately describes the 90 degree angle between the cylinders. Over the course of its 1971 to 1974 production run Ducati sold 4,133 examples of the 750 GT, make it a somewhat rare motorcycle.

Today, we are pleased to feature this beautiful, iconic copper colored 750 GT. It has been fully restored, and on display in a private collection for the past eight years. With virtually zero use since the its restoration, albiet with routine upkeep, it’s fair to say this bike is as close to new as it gets.

This 750 GT underwent a full restoration in 2010 by D&B Cycles, a specialty Ducati shop, in Upstate New York. Its current owner purchased the bike from the owner who commissioned the restoration, drained the fuel and fluids, and parked it in his private collection where it has remained ever since.

Due to its current dry state, we did not ride or see the bike run. However, its current owner is a longstanding client of ours and certainly believe him when he says this bike needs nothing. According to the owner, this is a “2 kick” bike (engine will start in 2 kicks) and is in nearly perfect mechanical condition. Presumably, the next owner should only need to change the battery, fluids, and add fuel; this 750 GT is ready to be enjoyed.

Cosmetically, this Ducati is without any noticeable blemishes, scratches, dents, or scuffs. This makes sense considering the bike has spent its entire second life only on display! The chrome work and paint have a wonderful shine and lots of depth. All plastic and rubber bits have maintained their color and show no signs of drying out.

This 750 GT also comes with a new, extra set of Marzocchi shocks and a number of other miscellaneous parts. We believe this bike would make for an amazing retro rider, yet considering the very limited number of these, it would be equally welcome in a private collection or at a show. 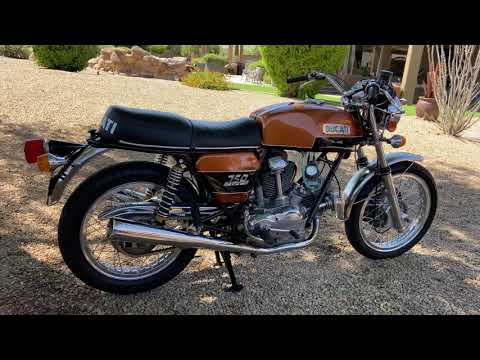