SOLD to New York!!! We are proud to offer for sale a numbers matching, unmodified 1973 De Tomaso Pantera L. As a Southern California car since new, this is a completely rust and accident free example with only 63k original miles. The last owner of 30 years enjoyed it for 15 years and it was then stored for another 15 years. We’ve completed a comprehensive cosmetic and mechanical recommissioning of this rare and excellent example of this iconic, cool and quirky 70’s exotic. We invested in excess of $30,000 in the restoration work over the past year. This is now ready to be enjoyed by collectors and enthusiasts alike. Hagerty #2 values these cars at $100.000.

The word “Pantera” is Italian for Panther. This vehicle was in production for 20 years (1971-1992) with 7,260 examples produced. The Pantera was designed by the Italian design firm Ghia’s American-born designer Tom Tjaarda and replaced the Mangusta. Unlike the Mangusta, which employed a steel backbone chassis, the Pantera’s chassis was of a steel monocoque design, the first instance of De Tomaso using this construction technique.

The Pantera logo included a T-shaped symbol that was the brand used by De Tomaso’s Argentinian cattle ranching ancestors, as well as a version of the Argentinean flag turned on its side, inspired by the company’s founder, Alejandro De Tomaso, having been born and raised in Argentina.

Late in 1971, Ford began importing the Pantera for the American market to be sold through its Lincoln Mercury dealers. Several modifications were made to the Pantera for the 1972 model year including the introduction of the Pantera L (for Lusso or Luxury) which featured a large black single front bumper that incorporated a built-in airfoil to reduce front end lift at high speeds, as well as the Cleveland engine now having a power output of 266 hp (198 kW). The “L” model featured many factory upgrades and updates that fixed most of the problems and issues the earlier cars experienced.

This Pantera was sold new in Southern California in 1974. On January 17, 1990, it was was bought by Mr. Bruce Junell from Belmont, CA, who owned the vehicle for the past 30 years. It was last registered in 2005 and still wears its original California “Blue Plate” license plates today. Upon seeing this example, we recognized it to be a rust free, accident free, unmodified and clean example.

We have invested over $30,000 and countless hours into improving it cosmetically and addressing common issues these vehicles face. The restoration work is all photo documented and the car will come complete with receipt and documentation. Please contact us for a full detailed list of work performed, but major highlights include a professional bare metal repaint, refurbished axles, rebuilt steering rack, rebuilt brake system, rebuilt A/C system, full clutch service, new door and window seals, new radiator and fan, headlight and window systems rebuilt, as well as a major servicing (fluids, belts, spark plugs, etc.). Also worth noting, we have the original spare tire, air canister, tools and books / user manuals!

We can state confidently that this is rust and accident free because we painstakingly had all the original paint removed and had the car down to bare metal. All the doors, trunk, hood, glass and windshield, etc were removed and applied a beautiful repaint in the original Silver Poly (Paint Code V-613) in a two stage using quality Ditzler materials. This work is all captured in photos that will come with the car.

Today, this Pantera really purrs. The 5.8 L (351 cu in) Ford Cleveland V8 engine pulls strong and sounds very nice, not quite Italian exotic, but also not like American Muscle. The ZF transaxle 5-Speed shifts smooth (especially now with its new clutch and servicing). The A/C blows strong and this car has absolutely no problem with driving around in the heat. The car breezed through our final inspection and all gauges and instruments work as they should.

Moving to the interior, this vehicle is in very nice, original condition. It wears all of its original black leather interior which while not perfect, only displays subtle signs of wear. The original carpet is also in very nice condition and there are no signs of sun or heat exposure anywhere on this car. The original dash has no cracks and looks just right. It is nearly 40 years old and has covered 63K miles after all! But with that said, there is still a “tightness,” or solid feeling to everything. The cosmetic imperfects are small, things like wear in the carpet, scuffs on certain touch points, and lettering that has faded. We think this is the perfect combination of a car that is an honest survivor, while looking sharp and performing great.

At the end of the day, this Pantera represents an incredibly cool glimpse into the Automotive Past. The 70’s were weird enough without the Pantera. But this vehicle adds a new level of quirkiness, giving its driver a sample of what wealth and performance felt like in the age of disco! But bellbottoms aside, this Pantera is truly a great and rare find. Given its history, recent work done, and unmodified condition, we’re certain any interested buyer will not be disappointed.

For more information, or to view this vehicle at our Phoenix Showroom, contact Daniel at +1.917.890.4230 or at daniel@classicpromenade.com 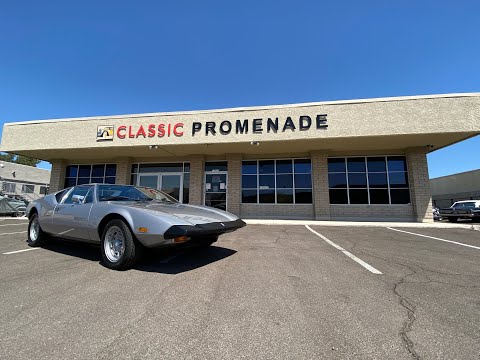