Did you know? The BSA 441 was THE dirt bike of the 1960s and was known to be highly tuned in race form. Through the success of motocross in 1964 and 1965, BSA created the ‘Victor’ in spirit of their victories in motocross races. Interestingly, the off-road trim of the ‘Victor’ was designed specifically for the American Market.

We are excited to present this beautifully restored 1969 BSA 441 to our motorcycle enthusiasts. With only 15 miles since its restoration, this bike is as close to new as it gets!

This BSA is the perfect fit for a private collector’s garage or simply anyone who enjoys the purity of the retro motorcycle feel. The the fuel tank was drained in 2010 when the previous owner bought this piece of history and has been on display since. The restoration was completed at a specialty shop in Loveland, CO.

We love the Cub Scout Yellow (116) paint and high shine chrome work. Considering this bike was restored and then immediately parked, there is almost no sign of wear of blemishes. That said, we did notice a very small dent in body behind the seat cushion (see photo), as well as some of the lettering on the seat cushion beginning to fade. Beyond that, we’re confident in saying this bike looks just about perfect.

Mechanically, we’ve been told by the owner it takes three kicks to start the motor and is a very engaging ride. The battery is likely in need of replacement, and the fuel has been completely drained. We at Classic Promenade have not seen the bike run, but its current owner is a long standing, trusted client of ours. We take his word for it when he says the bike is in great shape. With the majority of its restored life parked in a showroom, there wasn’t much that could have happened to this bike!

Through its successful history with motocross and through retail markets around the world, the BSA 441 is an extraordinary motorcycle, with this example representing a unique opportunity to own a special piece of motorsport history. 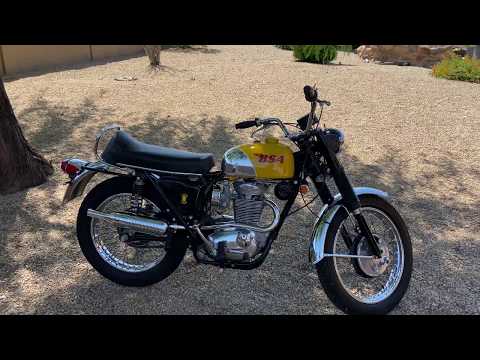