I love these 300SE Coupes. They are a classic Mercedes-Benz design and represent a car way ahead of it's time!

This is a beautiful 1966 Mercedes-Benz 300SE Coupe with factory A/C owned by a single enthusiast and collector for the past 42 years.  Being from Washington and Arizona, this is a rust-free and very nice example that has been restored only as necessary.

Built on January of 1966 in Stuttgart’s Unterturkheim Plant, this 300SE Coupe (W112) is one of only 2,419 examples ever produced. In fact, this car is production number 304. First purchased on February 9, 1966, this Coupe was previously owned by Mr. William J. Mange of Seattle, Washington.  In 1979 the Coupe was then sold to it’s current owner, Mr. Stan Jason.  Mr. Jason enjoyed a collection of about ten significant milestone cars.  Classic Promenade is pleased to offer this Coupe on behalf of Mr. Jason’s estate.

The amount of documentation accompanying this 300SE is impressive and dates back to the 1970’s.  This is a clear indication of the care and attention it’s received through its entire life.  This Coupe is in largely original condition, with the exception of an aftermarket radio (original included) and a beautiful re-paint in Metallic Silbergrau (Silver Grey DB180).

The Silver Grey livery is in overall excellent condition.  Even in direct sunlight, the car has tremendous depth, shine, and luster. Swirl marks were either non-existent or hardly noticeable.  The 300SE’s benefit from an abundance of chrome and stainless steel trim.  The chrome on the bumpers, grill, and window trim are all very impressive. We did, however, notice three small dents in the front bumper (about the size of a pen tip). The black inserts in the vertical bumper guards on the rear have show some abrasion, and the rubber weather stripping around the rear window is cracking in a few areas.

The interior is equally well cared for. The Schwarzlieder (black leather) and zebra wood are a an elegant and tasteful combination, and suit this Mercedes very well. The seats have maintained their shape very well, with essentially no signs of fatigue or warping.  The leather is very soft and free of any scratches or blemishes.  This Benz has a factory Kuhlmeister A/C system which works well. The zebra wood is largely in very good condition, though there are a few signs of minimal cracking, particularly along the top of the dashboard and around the gauge cluster. We also noted that the trunk light does not work, there is no tool kit, and heater is only operational on the passenger side. Beyond that, the overall condition of the interior is presents very well.

Mechanically, this 300SE runs and drives great, and understandably so. The 3.0-liter 6-Cylinder (M186) was the flagship motor for Mercedes-Benz at the time, and shares it’s DNA with the legendary 300SL. See photo in the reel for numbers matching confirmation. Our inspection came back very good, with no mechanical issues.  The airbag suspension was refurbished in 2004, and while it was in our shop, we replaced both front air valves. The system works exactly as it should and gives this Benz an extremely comfortable and confident ride. Additionally, several brake components including the calipers were replaced in 2005, and the transmission was completely rebuilt in 2009. Also in 2009, the air conditioning system underwent a major servicing (and still works well today), coolant leak and oil  leaks were fixed (car does leak today), and the rear differential underwent a major service. Since 2009, this Mercedes has only been driven a few hundred miles. The odometer indicates just under 53,000 miles, however documentation shows that its true mileage is 153,000.  The engine compartment is in beautiful condition and reinforces the fact that this has been faithfully serviced.  We did find that the hood insulation has been removed.

Overall, our impressions of this 300SE Coupe are very good. We love the timeless color combination and are impressed with how presentable and solid this car is. We hold the W112 era Mercedes in high regard as they are the predecessors to the modern S-Class, represent an extremely high degree of engineering excellence, and were produced in such low numbers. These cars truly are special and collectable.

For more information and details, please email, call or text Dan Shaffer at dan@classicpromenade.com or +1.716.704.0291.  This Mercedes-Benz is in our showroom in Phoenix, Arizona. 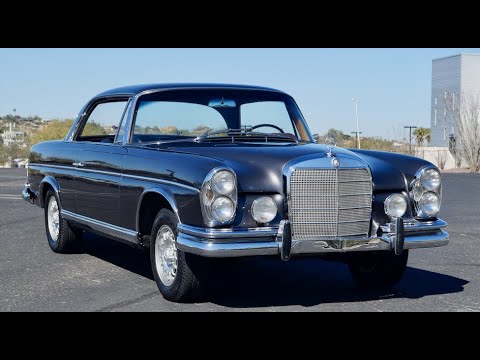 Dealer for MB sold several new. 300SE coupe was nearly the end of the line for the ‘coach built’ marque.
300SL engine sans direct fuel injection(no chips in that era..not easy) My opinion that era ended with
6.3/6.9. Adrian

We agree. They have all the feeling of the coachbuilt classics.

No products were found matching your selection.