This is a wonderful PF Coupe that is a blast to drive and experience.

This is a terrific 1960 Ferrari 250GT Series I PF Coupe that was purchased new in California and lived with four owners since new.  Having accumulated 63,000 miles from new and subject to a $190,000 of restoration work, it is a great running and driving example.

Milton Garland from Corona, CA appears to be the first owner and sold the 250GT to Fred Wofford from Tahoe City, CA on December 5, 1973.  It was then acquired by its present owner, William “Bill” Cheney from Reno, NV on December 5th, 1975.  Mr. Cheney was an avid pilot and loved his Ferrari.  We have on file $190,000 of restoration expenses from the mid to late 1990’s through the early 2000’s.  Most of the restoration work was performed by International Motorcars in Jackson, Mississippi and Intrepid Motorcars in Sparks, NV.

Finished in Red livery, the paint has nice shine and luster.  The chrome and stainless trim are all in nice condition and the Boranni wire wheels are striking.

The interior is finished in red leather with a black dash.  The carpeting has been removed as well as the package shelf.  The leather is soft and supple.  The gauges all work as they should.

The three-liter V-12 SOHC engine has been professionally rebuilt as well as the five-speed transmission and suspension.  This Ferrari performs well and would likely replicate the 7.1 second 0-60 mph times achieved by the test drivers from Road & Track in 1960 (Test Drive 247).

For more information and details, call, text or email Harry Clark at +1.602.245.7200 or harry@classicpromenade.com.  The PF Coupe is available for viewing at our Phoenix showroom. 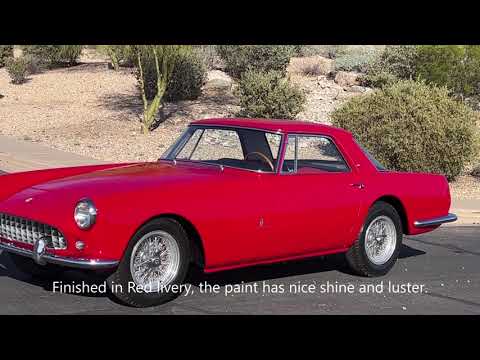