Interesting Fact: The fake louvers on the hood and the chrome trunk spears were unique to the 1958 Corvette, for the one model year only.

This is an all numbers matching 1958 Corvette Fuelie that has a well documented history, a complete concours restoration and a fantastic color combination. If you are a serious Corvette collector, this is one for you to consider. This Vette has never been shown and is ready to clean up at NCRS or concours events worldwide. Importantly, this car has never been in an accident nor does it have any filler (only gel coat). This was painstakingly restored to be one of the best and most authentic examples in existence.

The exterior is gorgeous in Silver Blue metallic with Inca Silver contrast within the coves. All the paintwork is spectacular and only the top PPG paint was used. The chrome is absolutely beautiful. The white convertible top and the Silver-Blue interior are from the specialists at Al Knock. The interior includes a Wonderbar radio and parachute seat belts.

This Corvette has been in storage under a tarp on blocks or being restored for the past 45 years. This Corvette was produced on December 4th, 1957 in Flint, Michigan. The history is well documented and spent much of its early years in and around Rhode Island and Bove Chevrolet. Ray Bidlock recalled that the original owner traded the Vette into Bove Chevrolet and a sailor snatch it up before Ray could buy it. Several years later, in 1968, that same sailor needed the cash and fate had Ray meet him in a bar, where he proceeded to buy the Fuelie for $325. Ray enjoyed the Vette until he sold it on June 8, 1972 to Carl Freeman, also a Coast Guard sailor. Carl later moved to Colorado and stored the Vette on blocks under a tarp for 35 years. It passed through two other owners until it was sold to Don and Kenneth Hill from Arizona. The Hills proceeded on a complete, full nut-and-bolt restoration of the car, making it now one of the nicest in existence.

The numbers matching and date coded components are all documented. This is the original engine block and correct for the 283 CID fuel injection model with the optional higher horsepower 290 hp injection. The venerable 283 V8 has the solid lift cam, the correct dated intake manifold and the dual point tach drive distributor. The T-10 7a four-speed manual transmission is paired with the posi-traction 4.56 rear end and the engines throaty growl exits through off road exhausts. Even the correct spiral coil shocks have been installed on this example. Everything is as new, or better.

The only cosmetic defect we’ve seen is the chrome fascia for the Wonderbar radio. It appears to have some pitting. The rest of the car is absolutely stunning and as good or better than any Corvette made in 1958. The car comes complete with detailed restoration receipts, an owners manual and complete documented history. We have this priced to sell. The Hagerty No. 1 value for this car is $184,000!

For more details and information, please call or text Harry Clark at +1.602.245.7200 or email us at harry@classicpromenade.com. The Vette is available for viewing in our Phoenix showroom. 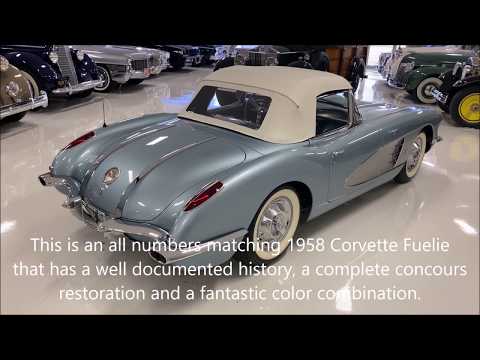