SOLD!! We are proud to offer this very clean, very cool 1955 Ford Thunderbird. With a recent restoration, 292 cubic inch V8 and manual transmission with overdrive, this Thunderbird is truly the driver’s choice version of this iconic 50’s era sports car.

The Ford Thunderbird was introduced in February 1953 as response to Chevrolet’s new sports car, the Corvette. Under rapid development, the Thunderbird went from idea to prototype in about a year, being unveiled to the public at the Detroit Auto Show on February 20, 1954. It was a two-seat design available with a detachable glass-fibre hard top and a folding fabric top.

Production of the Thunderbird began on September 9 of that year, with the car beginning sales as a 1955 model on October 22, 1954. Though sharing some design characteristics with other Fords of the time, such as single, circular headlamps and tail lamps and modest tailfins, the Thunderbird was sleeker in shape, and featured a hood scoop and a 150 mph (240 km/h) speedometer not available on other Fords.

Though inspired by, and positioned directly against, the Corvette, Ford billed the Thunderbird as a personal car, putting a greater emphasis on the car’s comfort and convenience features rather than its inherent sportiness. The Thunderbird sold exceptionally well in its first year. In fact, the Thunderbird outsold the Corvette by more than 23-to-one for 1955 with 16,155 Thunderbirds sold against 700 Corvettes.

This particular Thunderbird has recently benefited by a new repaint in its original Torch Red (Code R). The paint and chrome work on this Thunderbird are also fantastic. The red livery really pops and is beautifully contrasted against extremely bright chrome. There are two small dents in the grill surround and one in one of the wheel covers.

On the inside, this T-Bird has the newer correct red and white interior (Trim code B) and is a classic throwback to trendy 50’s style. While this vehicle does not have power steering or air conditioning, it does have power adjustable seats, and an adjustable steering column. The black canvas fabric top is in average shape, but the vehicle does also come with a hardtop and stand.

Mechanically, this car is in excellent condition and surprisingly quick. The V8 and three-speed manual transmission makes this Thunderbird very fun for spirit driving. The motor pulls strong and the vehicle holds steady at speeds in excess of 80 mph. Also worth noting is the braking performance; even under emergency braking, the vehicle holds true straight without any vibrations. The wide white wall radials look terrific and add to the safety and performance. The current owner, an avid car collector, confirms that all mechanical and electrical components do operate properly. We also conducted our full independent inspection and the car is in very nice condition with all systems and mechanical operations performing well, except the clock is not functioning. See the photo gallery showcasing the impeccably clean and rust free under carriage.

This Thunderbird is the very first of one of Ford’s most iconic nameplates. Here is your chance to own a stylish piece of automotive history.

This vehicle can be viewed at our Phoenix Showroom. For more information, please call, email or text Harry Clark at +1.602.245.7200 or sales@classicpromenade.com 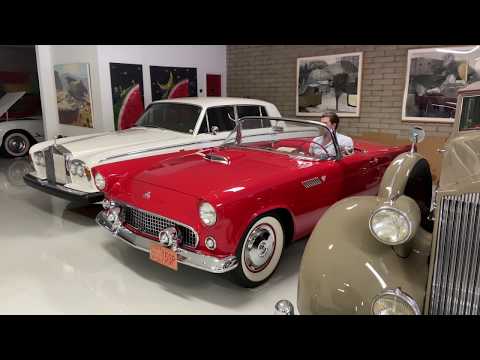