This is our first car offered as a "barn find" or "project". She has been fully recommissioned and is incredibly fun to drive. Definitely watch the test drive video! The SE or M Models are rare and have increased performance and were made for enthusiasts. This doesn't disappoint!

PRICE REDUCED $10,000!!  This is a barn-find, all-numbers matching 1954 Jaguar XK120 SE Roadster (OTS) that runs and drives brilliantly and had been enjoyed by its last owner of 42 years.  We almost never offer “project cars” as they rarely excite us.  This is an exception because it is a nice solid original example of the rare high-performance Special Equipment (SE) that we have mechanically recommissioned to remove the risk for its buyer.  This was originally built in the very rare color combination of Lavender Gray with Red Leather and a Fawn convertible top.  This all-numbers matching example can be enjoyed as a survivor as-is or returned to its original splendor.  This would be a wonderful car to enjoy on the Copperstate 1000 or the Mille Miglia.

The competition-oriented Special Equipment (SE) version (also called the M version for “Modified” in the United States) used the 3,442-cc, twin SU H8-carbureted DOHC inline-six engine that revved 400 RPM higher to 5,800 RPM and made 180 hp and 203-lb.ft. of torque, respectively 20 and eight more than standard, thanks to an 8:1 compression ratio (up from 7:1), high-lift camshafts, a unique crankshaft damper, dual exhaust and a lightened flywheel.

This XK120 SE was built by the factory on the 8th of February, 1954 and was dispatched to its original distributor, Hoffman Motor Car Co. in New York on the 15th of February.  The MSRP was $3,545.  The early history is not known, however, Ivan Cotterill acquired this Jaguar just before March 21, 1979.  Mr. Cotterill lived in Worthington, OH and immediately joined the Jaguar Association of Central Ohio.  The history and authenticity are confirmed by not one, but two Jaguar Heritage Trust Certificates.  One was ordered by Mr. Cotterill in March of 1979 and then a new, more thorough Certificate from December of 2021.  The Certificates confirm that this is a rare SE and that the chassis, engine, body, gearbox are all original to the car.

The livery is completed in an aqua blue that was likely painted in the 1970’s.  There are numerous small dents and scratches from use and storage.  This is the first and only car that we have not bothered to detail; instead leaving it dusty and dirty.  There is a little rust showing on the passenger side body that would be a relatively easy repair.  Overall, this has little rust with the exception of normal surface rust on its chassis.

The SE’s were delivered with the wire wheels with the winged knock offs.  This Jaguar has the silver painted wire wheels, but the wires could be in the body color, silver or chrome.  The tires are exceptionally old but we left them on the car to keep it in “as-found” condition.  A black vinyl convertible top and its side curtains are all present.

The interior is finished in a black and teal vinyl with black carpeting.  The dashboard looks original in its black vinyl.  The steering wheel is also original and in good condition.

The engine compartment is where the magic lies.  The matching numbers (Engine No. F 1836-8S) confirms that it is the original 3.4-liter DOHC inline-six producing 180 hp with its matching numbers four-speed manual transmission.  In recommissioning the Jaguar, we rebuilt the carburetors, changed all of its fluids and rebuilt the master and wheel cylinders.  This allows us to drive her locally and have some fun with her.  The odometer states 74,000 miles, which we assume to be the correct total accumulated mileage.  The oil pressure is excellent, she runs at a terrific temperature even in 100 degree weather and she doesn’t emit any smoke.  She has great power and is a blast to drive.  The exhaust is disconnected before the muffler so she sounds like a racecar, making it even more exciting.  We decided to keep her that way for the videos, just to enhance the experience!

The chassis at some point was sprayed with a primer to prevent rust.  In 1979, Mr. Cotterill replaced the sill plates.  Overall, the chassis and body have limited rust and the Jaguar would make for a straightforward restoration.

This Jaguar comes complete with its convertible top, side curtains, two original Jaguar Heritage Certificates, some historical documentation and some tools.  The Hagerty Values for the XK120 SE Roadster are $102,000 in No. 3 “Good Condition” and $64,100 in No. 4 “Fair Condition”.

For questions or more details, please call, text or email Harry Clark at +1.602.245.7200 or harry@classicpromenade.com.  The Jaguar is in our Phoenix showroom. 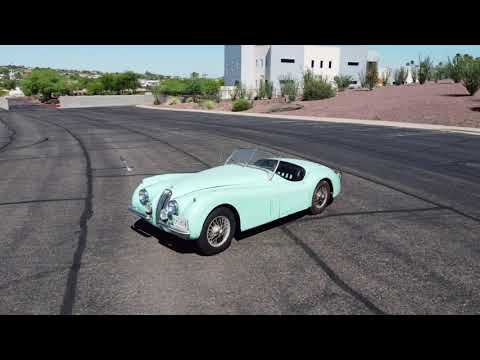 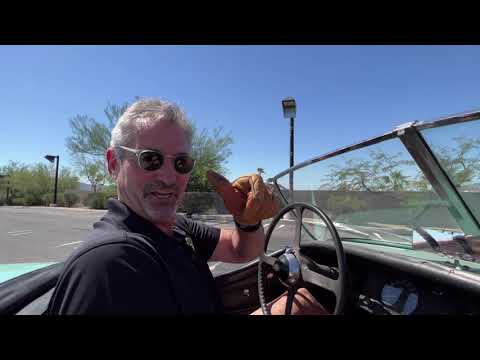