This is one of the nicest Packard woodies in the country. It received a no-expense spared restoration for touring and for competitive concours showing. It is being offered for a fraction of the cost of restoration.

PRICE REDUCED $20,000!!  This is a gorgeous example of a fully restored 1948 Packard Eight Station Sedan (Woodie) that has won numerous Best in Show and First Place wins and is one of the best extant.  This Packard benefitted from a no-expense spared restoration by one of the top Packard specialty restoration firms in the country.  This would be an ideal example to enjoy on tours or would be a competitive concours show car with only minor detailing.  If you want a showroom new Packard Woodie, this is one to consider.

This Station Sedan is said to have been bought new in Pittsburg for one of the summer estates of the Mellon family.  Later in its life, it joined a collection in Orange County, CA and was then acquired in 2009 by its present owner.  This Packard benefitted with an exceptional nut-and-bolt restoration that was performed in 2011 by the craftsmen at Custom Auto Service in Santa Ana, CA.  Custom Auto Service specializes in Packard’s and is the premier Packard restoration facility west of the Mississippi.  (Custom Auto Service restored two Packard’s for us over the years, both being shown at the Pebble Beach Concours) Nothing was overlooked and no short cuts were taken.  Starting with a well preserved, rust-free example, this restoration is of such quality that it garnered numerous first place awards including more than one Best in Show and the coveted Packard’s International Circle of Champions (requiring nearly perfect scores).  The quality of the finishes are exemplary in every regard.  This is also a very well optioned example, with the rare overdrive, radio, heater, backup light, Egyptian hood ornament and electromatic clutch.

The livery is finished in a concours quality Serpentine Green (Paint Code D) and is complimented by all new beautifully finished maple and ash wood.  The paint is nearly perfect today with gorgeous shine and luster.  It is beautifully polished for show.  The chrome, as mentioned earlier, is fantastic and is absolutely of concours quality.  The wood is all as-new.  We love the rare Egyptian hood ornament which we have never seen before on a Packard.

The interior is finished with beautiful saddle vinyl with contrasting inserts that is in concours condition and is very well done.  The saddle choice is both elegant and correct for the model.  The wood painted trim on the inside is done beautifully as well.  The chrome on the inside is also done to concours standards and is excellent.  The gauges and trim are also done very well, and the tan carpeting is as-new.  The headliner is finished in a beige vinyl and is tight and also looks as-new.  The beautiful cargo area is finished in wood with stainless steel rails and is in concours condition.

The original venerable straight eight 288 CID five main bearing engine has been upgraded during the restoration to a more powerful 327 CID displacement, delivering 145 hp.  The rebuilding of its original engine was performed by Cal Soest, a noted icon engineer within the Packard community.  The power is transmitted through the three-speed with overdrive transmission.  The R-9 overdrive is a rare option for this series Packard and a very important option for cars that will be toured and driven as it makes it capable of touring at modern highway speeds. Also added for touring are seat belts, a battery cut-off switch and radial tires.  This also comes complete with a cache of spare parts, tools and such for the new owner.

The 22nd series Packard station sedans were the only Post War woodies offered by Packard.  They were based on the six cylinder 120-inch wheelbase sedan bodies that were then shipped to the Briggs Manufacturing Company to be converted to the woodie wagons.  The Packard was one of the first steel framed station wagons built, where the wood is not structural but rather more aesthetic.  Over a nearly three-year production period only 3,900 were built.

For more information and details, please call, text or email Harry Clark at +1.602.245.7200 or sales@classicpromenade.com.  The Packard is in our showroom in Phoenix, AZ. 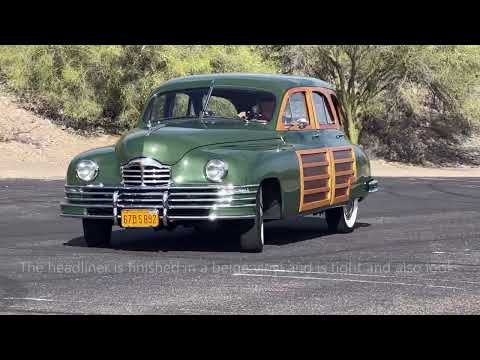 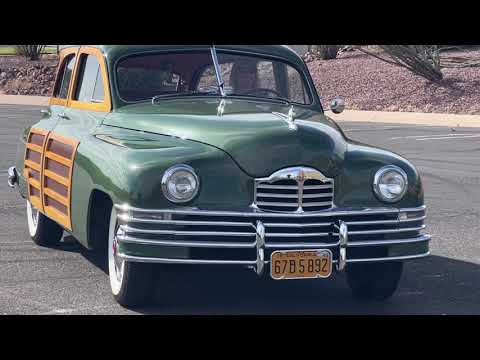 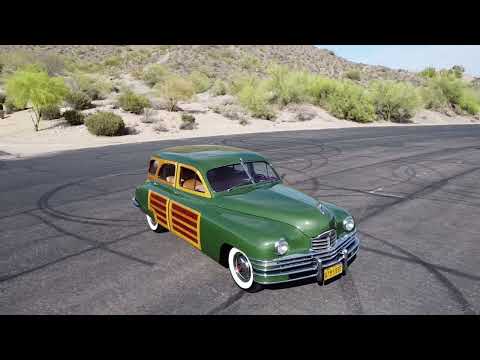