This is an opportunity to acquire a very well-known and highly regarded Darrin Packard. This is ready for concours display or to be driven and enjoyed.

This 1940 Packard Darrin is one of the last true Darrin Packard’s produced. It was produced in March of 1940 and delivered to Ms. Catherine Tyne, of Nashville Tennessee, the young daughter of well-known Tennessee attorney and former candidate for Governor Thomas Tyne.  This is one of 44 produced and approximately 32 remaining.

As a well-known socialite and bachelorette at the time, the Packard Darrin was quite the statement, even for a woman of means such as Ms. Tyne. When the Nashville dealer, E. Gray Smith, brought the car to the family home, Ms. Tyne was smitten.

Catherine Tyne owned the car until 1950, when she married. Her husband would not permit her to keep the Packard, as it was a representation of her “single life”, and she soon sold the Darrin to a young man working at their country club, who was enamored with the car. Cars, gasoline, and particularly tires being expensive and sometimes hard to find at the time, the young man decided to sell the car soon after, and Frank Waterhouse became the next lucky owner.

Waterhouse enjoyed his ownership of the car through the 1950’s, showing it at the Pebble Beach Concours d’Elegance during this time period. It was also during this period that the distinctive dashboard shown in the present photos was installed, a 1938 V-12 dashboard donated from a Packard limousine. This dashboard became synonymous with this particular car as an in-period addition that added to the charm and usability of “#2012”. Waterhouse also brought the Darrin back to the Packard agency that originally sold the car for a photo shoot before he left Nashville for Pasadena, California.

During his ownership, the Darrin was featured in Road and Track in May, 1955, in the legendary Salon section, along with other significant Packard motorcars. Although the article gave a fantastic synopsis of the car, it also stated that this particular Darrin was produced in Hollywood. That information was incorrect. The car was produced in Connersville, Indiana.

When he was tragically killed in an automobile accident (not in the Packard), his administrator, a man named Malone, sold the car to Janard Loken, who owned #2012 into 1960’s.

Under the ownership of Janard Loken, the overdrive in the transmission was installed, and the Darrin was enjoyed on quite a few tours and CCCA Caravans, where it was certainly in its element. After his passing, Loken’s wife sold the car to a couple in New Jersey in the late 1960’s, where it remained until 1974, when it changed hands once again to Robert Kaufmann.

Under Kaufmann’s ownership the Darrin was driven but not shown at any concours or even local events, save for an outing in the late 1990’s at Hershey.

As you can see from some of the photos of the Darrin throughout the years, the wheels were changed for a time to 15-inch wheels, owing to the fact that 16-inch tires were nearly impossible to source. The original wheels were (thankfully) kept with the car and eventually re-installed with the original hubcaps and wheel covers when 16-inch tires became widely available again.

The last caretaker of the car, before the current female owner, was a gentleman from the southwest who chased the car for more than 28 years. During his long tenure of ownership, he re-built the motor from top to bottom, being careful to save and preserve all of the originality of the finishes and history.

And as a note to the originality of the car, it is evident from the “not so careful” welds around places such as the radiator that were left in place by the caretakers of the Darrin throughout the years. There were also a few braces installed by early owners of the Darrin to alleviate the front end shaking, as the early cars were prone to exhibit.

The present condition of #2012 is what most collectors would deem wonderfully and correctly preserved. While the car has been painted to the original factory Packard Maroon and the tan canvas convertible top replaced at some point many years ago, the gorgeous maroon leather interior is in very nice original condition, with the red carpets being replaced at some point.

The Darrin has never actually been taken apart and subjected to a full restoration, which at this point is a blessing. The engine, which is of course original to the car, was rebuilt approximately 20 years ago by the last owner and exhibits the proper compression ratio. The non-factory braces mentioned earlier, installed shortly after the Darrin’s delivery, are still in place, as well as many of the factory welds and other evidence of originality.

One of the interesting aspects of the performance side of the #2012 is that the engine has the near mythical Edmunds dual carburetor set up and the special alloy finned cylinder head installed (we’ve never seen these in real life before!).  The set up was very likely installed by Jared Loken in the 1960’s, who was also the owner responsible for installing the overdrive in the transmission, making #2012 not only more roadable, but faster as well. The correct and original intake and carburetor set up was also preserved through the years and will be included with the sale.

Another very significant feature of #2012 are the Marchal head lights and trip lights. Due to the significant French influence of Darrin’s designs, this car had period Marchal head lights and trip lights installed, most likely early in its life, if not at the factory by special order, to accent its European appeal. They add a certain flair to the already beautifully designed front end.

As any Darrin aficionado already knows, these early Darrin Packard’s (through 1940) are special in and of themselves, not just because of their looks, but because they were among the last truly hand-built and truly custom cars to come out of the United States. The later Darrin Packard’s, while still very special in their own right, used more standard Packard parts and had a different look to them. The early cars, such as #2012, exhibited the true French styling that Howard “Dutch” Darrin strove to achieve on an American chassis. And in that exercise, he succeeded wonderfully.

#2012 comes complete with full documentation and is ready to drive and enjoy, or she can be shown at any concours event.  The engine compartment and chassis are fully detailed.  As a Super Eight 180, she has her venerable 356 CID straight eight with nine main bearings.  This is one of the best engines Packard ever developed.

For more information and detail, please call, text or email Harry Clark at +1.602.245.7200 or harry@classicpromenade.com.  She can be viewed at the owner’s home in the Chicagoland area. 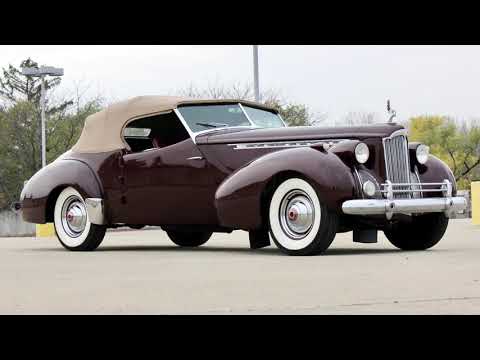