I have always loved the unique appearance of the Packard Brunn Cabriolets. This one is uniquely special being largely original and its Hollywood provenance. These are undervalued in the market making this a terrific value. I believe this to be the closest Packard had ever gotten to a Rolls-Royce in terms of elegance.

This 1939 Packard Twelve Touring Cabriolet by Brunn was the most expensive and exclusive Twelve ever authorized by Packard.  This is one of two made in 1939 and was hand built in the Brunn coachworks in Buffalo, NY.  Being sold new by the Earl C Anthony “Dealers to the Stars” franchise in Los Angeles, it was bought new by music and film legend Ray Noble on April 21, 1939.  Since then, it has been beautifully preserved as a gorgeous original car with minimal restoration work performed over the years.  It is now ready to be shown at any major concours event or added to a collection.

Brunn & Co. was a premier coachbuilder that earned Packard’s respect to build a small number of Cabriolets in 1938 and 1939.  These featured Brunn’s innovative “Neutralite” tinted skylights to allow the chauffer to see the streetlights.  These Cabriolets were designed to be the ultimate big city limousine allowing the rear seat passenger to be seen by the public at a moment’s notice by folding down the rear top.  These were the most expensive Packard Twelves ever built with Packard’s authorization.  While these were “Catalog Customs”, these were in fact complete coach-built masterpieces.  Packard shipped two Model 1708 chassis to the Brunn facility in Buffalo, NY in 1939 to build the Touring Cabriolets (Style 4086).

Brunn’s coachwork is all hand formed aluminum and is in spectacular condition today.  The build quality is absolutely breathtaking.  This Cabriolet sold new for $8,355, a massive sum in 1939.

This Twelve was shipped from Brunn to Earl C. Anthony in Los Angeles.  The fist owner was Ray Noble, who gain fame first in his homeland of England but by 1934 had moved to New York to play at the prestigious Rainbow Room.  Shortly thereafter, Ray moved to Los Angeles and was a highly respected bandleader and score writer for Hollywood movies.  He also gained acclaim as the “Silly Englishman” in a variety of comedies.  This Brunn has been part of the collection of several noted collectors over the decades.  She was more recently owned for many years by the late enthusiast Sam DelRusso Sr., of Connecticut, and was acquired from his estate by Robert Castignetti, of Massachusetts. Mr. and Mrs. Kughn acquired the car sometime later.  In 2014 it joined a prominent collection in Louisiana.

The livery is in its original Black lacquer that is absolutely stunning.  All of our research and representations by former owners suggested that the black paint was original.  Not trusting this, we had a paint expert analyze it while touching up two areas and he confirmed that it is original.  It has incredible depth and luster and truly looks like a more recent repaint.  The upper tan paint has been redone and is in excellent condition.  The tan canvas has been replaced and is in very good to excellent condition.  The chrome and stainless steel are all very good to excellent.  All of the Brunn coachwork is hand formed from aluminum with only the front clip being Packard steel.  The doors and convertible top close like bank vaults, as though Brunn somehow was able to amplify its impact.  The twin Trippe Safety Lights complete the front end with its grill painted in the only-in-1939 manner.  The dual side mounts have the Packard See-Rite mirrors and the rear has a proper Packard trunk rack.  The two tinted “Neutralite” skylights are still in very nice condition and we love the deep veed windshield that has a wonderful sleek rake to it.  The more time we spend with this Packard, the more we love it.

The interior is just incredible.  The interior is largely original.  We believe that the carpets have been replaced.  We know of nothing else that has been replaced.  It is believed that the upholstery, headliner, trim and wood are all original, save for maintenance to the wood.  As one would expect, this Brunn is replete with options, including the AM radio, dual heater controls, a Jaeger 8-Day clock set into the division window and beautiful bookended walnut trim in every direction.  The interior is simply gorgeous.  The deluxe steering wheel has a couple of cracks from age and has never been restored or painted.  The Packard comes complete with a significant number of keys (original and copies), shop and owner’s manual and other materials.

The engine compartment houses the venerable Packard 473 cid V12 with 175 hp.  The engine compartment is well detailed and looks very appropriate for most concours events.  The v12 has upgraded replacement heads and the engine runs and drive beautifully with excellent power.  The three-speed column shift combined with the smooth torque of the V12 really move the shorter 139-inch wheelbase Cabriolet.  With its power assisted clutch and brakes, this Packard is a pleasure to drive.  The engine is silent and drives without smoke or any issues.

This is an opportunity to acquire one of the most prized senior Packard’s.  For more information and details, please call, text or email Harry Clark at +1.602.245.7200 or harry@classicpromenade.com.  The Brunn is proudly displayed in our showroom in Phoenix. 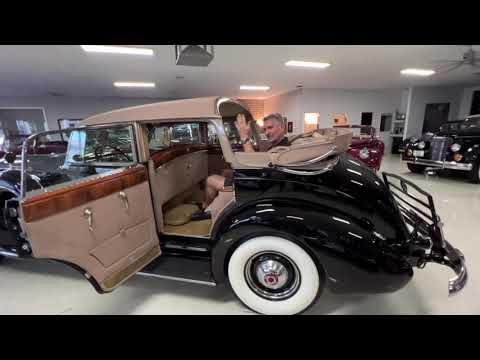 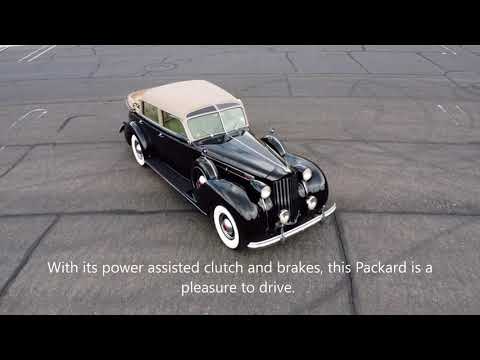 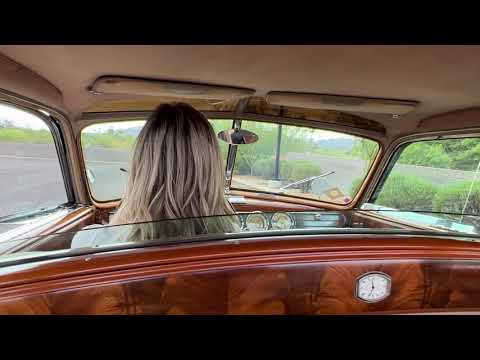 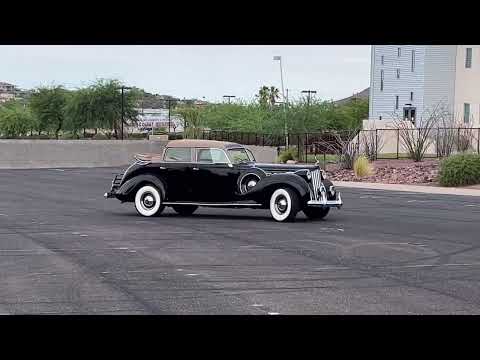