This is an iconic V16 Cadillac that has been part of the fabric of the SoCal Hot Rod and Classic Car community for over 70 years!! "Old Red" is a blast to drive, since it is an older restoration performed by one of the V16 experts. I wanted to keep this one for our own collection but need to sell it.

This is a famous Southern California 1931 Cadillac V16 Fleetwood bodied All-Weather Phaeton that was owned by one man for over 70 years!!   This V16 was named by its longtime owner “Old Red”.  She benefitted from an older restoration that today makes this one of the best driving V16’s you’ll find.  It has enough patina to make it eminently drivable, yet it would be gladly welcomed onto most showfields.  Importantly, she has her original body, data plate and engine.  Her story and her presence are a showstopper!

Paul and Al Schinnerer acquired “Old Red” back in 1949 near Edwards Airforce Base from John W. Meyer, a test pilot for Northrop Aircraft.  Mr. Meyer had used “Old Red” to tow his glider as part of the Flying Wing Program.   Al Schinnerer paid $75 for the V16 and by 1950 he sold it to his brother Paul for $150.  Paul retained ownership of “Old Red” for over 70 years and was commonly seen throughout the Southern California classic car scene driving her.  He was founding members of the Southern California regions of both the Classic Car Club of America and the Cadillac LaSalle Club.  As a young man, Paul initially hot rodded the V16.  A photo in the photo gallery shows it in the early 1950’s with Edelbrock intake manifolds and four updraft carbs when “Old Red” was in its Hot Rod configuration.  With these, Paul learned to shoot five-foot-tall flames to impress his friends and to gather crowds!  “Old Red” was an important part of the Southern California hot rod and classic car culture for over 70 years!  Part of her story and additional historical photos document her in Cummunigs book Cadillac V-16s Lost and Found.

“Old Red” has a two-tone Maroon and Burgundy livery complimented by red coachstripes.  The paint looks very nice throughout.  It has several small touched up chips, which make it approachable and, importantly, drivable.  The chrome is all in very nice condition throughout, and the wheels are correctly painted with stainless spokes.  It simply looks fantastic!  The convertible top mechanisms are all present and in good condition, but without canvas.  We decided to keep it this way, as Paul had enjoyed her for decades.  We had a new top boot made in black canvas with red piping- and it looks terrific!!

The interior is a nice grade of dark brown leatherette, likely 100 years old, but still quite nice today.  It is complimented by equally old brown carpeting that is very worn.  We chose to keep this as it has been, because it just looks terrific to us.  Having 100-point cars ourselves, we all LOVE the fact that this is a car you can just jump in and drive!  And how often do you see a V16 being enjoyed on the road?

The engine compartment is well detailed for touring and can be shown.  It is overall quite proper in its appearance and finishes.  The chassis is also an older restoration that is in overall nice condition and can also be shown.

“Old Red” runs great.  We’ve had her tuned up and fully serviced.  She is an absolute pleasure to drive.  The steering is fairly light for such a massive car.  It also has the V16’s ability to travel from 2 mph to 100 mph in third gear.  The lights and instruments work well.  The clock and the fuel gauge are not functioning.

Cadillac V-16s sported an overhead-valve, 452-cubic-inch engine, which produced 175 horsepower with a displacement of 452.3 cu inches.  The engine’s sole purpose was to be the smoothest and quietest luxury experience of the era, and Cadillac succeeded overwhelmingly.  “Old Red” drives smoothly in part due to her 148-inch wheelbase.

“Old Red” comes complete with a significant historical file, including its factory build sheet authenticating the Body No. and Engine No. as correct, and recent service records.  On our website you can see many historical photos and a terrific story written by Paul (a MUST read!).  She really needs nothing to be enjoyed as she is, or she can be taken to the next level without any difficulty.

For more information and details, please call, text or email Harry Clark at +1.602.245.7200 or harry@classicpromenade.com.  “Old Red” is available for viewing in our Phoenix showroom. 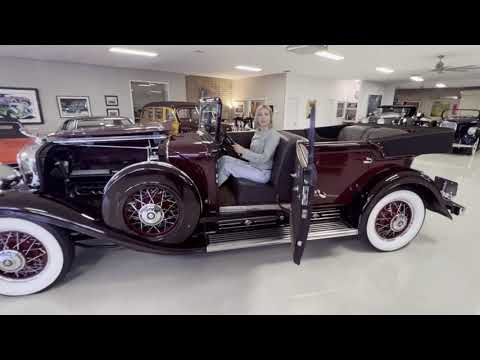 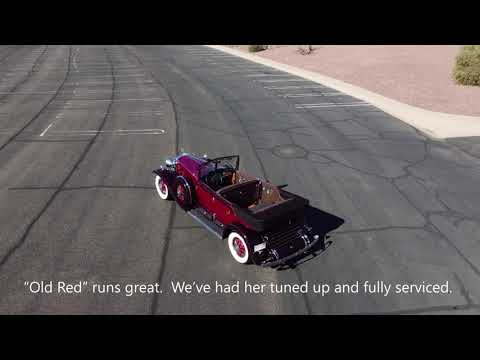 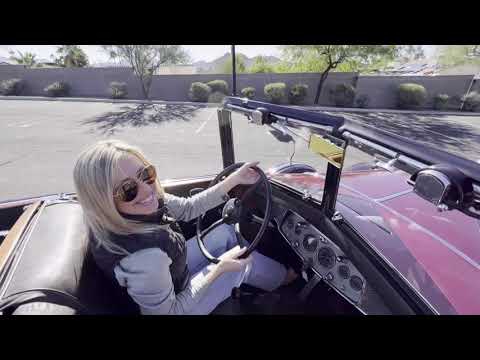