I LOVE this Rolls. Driving this has the exhilaration of an 8-liter Bentley. It has much more power than any Pre-War Rolls I've experienced, including PIII's. And since it's on a 150" wheelbase, it has a presence that few cars can come close to. I invite anyone to drop by for a test ride!!

This is a fantastic 1930 Rolls-Royce Phantom II with incredibly sophisticated Park Ward DHC stylized coachwork that has been fully restored and enjoyed across three different continents.  It has been restored by some of the leading Rolls-Royce engineers in the UK and Australia.  As incredible and formidable as it looks, this drives even better with awesome power and relatively docile handling. This is a truly exciting Phantom II.

137GY comes with approximately 200 pages of history, receipts, documentation and photos.  Rarely is a motorcar so well documented.  She was originally bodied as a Barker Pullman Limousine for Mrs. C H Palethorpe and was delivered on the 13th of February 1931 (Thus, this 1930 Rolls is titled as a 1931).  It comes complete with its original UK Registration Books that chronicles its use and ownership in the UK from 1931 through 1966. Thereafter, she was imported into the US, supported by numerous letters, receipts, registrations and other documents from its owners in California.  Mr. Robert Payne of Sutter Creek, CA owned it in the early 1970’s and then by 1977 she was sold to Judge Thomas Caldwell of San Mateo, CA.

Judge Caldwell sold the Phantom II to Mr. Roger Fry of Perth, Australia in October of 1986.  Mr. Fry was looking for a nice original Phantom II to make his dream car: a 1930 Rolls-Royce Phantom II Park Ward DHC.  Park Ward had made a famous Phantom II Fixed Head Coupe in this configuration on chassis number 195GY, but not a Drop Head Coupe.  This chassis being 137GY would be the correct time period for such a body, and the workmanship is incredible.  It is rare to see such complex and sophisticated craftsmanship on a rebodied motorcar.

After its restoration and over two decades of use in Australia and the UK, 137GY was mechanically restored by Harding Auto Service and Fiennes Restoration Ltd, in the UK during 2016 and 2017.  In our files is approximately $90,000 of receipts for this major mechanical restoration.  During this time, the restorers acquired a new replacement cylinder head, and restored the fuel system, brakes, suspension and electrical.  In short, it is today an incredible driving car with fantastic power and capable of high-speed touring.

Overall, 137GY has a consistent patina of a Rolls that has been restored over 30 years ago.  Whilst it would always be welcome at nearly every concours event in the world, she is really meant for touring first and showing second.

The Dark Blue livery is today in wonderful touring condition.  It has incredible shine and luster but also has many touched up scratches and some minor blemishes.  These are only evident upon close inspection.  The chrome and stainless are also in overall nice condition, but still consistent with a touring car. The bare aluminum wheel discs really pop against the dark blue and ominous Dunlap 20 inch blackwalled tires.  The black canvas convertible top is simple to raise and lower, and the top boot fits snugly and well.  The are a couple of small imperfections on the top and the boot cover, but nothing highly noticeable or to reduce their function.  There is a black trunk in the rear that is beautifully designed for the car, and looks just right.  This trunk is large enough to store all the necessary spares, books and tools needed for a tour, and then some.

The interior is a lovely gray leather with contrasting dark blue wool carpeting with gray leather binding.  The leather is soft and supple and without any tears, and the carpeting is also in nice condition.  The original dash is beautifully outfitted with all the necessary instruments, which function well.  The wood dash and cap rails along the doors and passenger compartment are all in beautiful condition.  The seating position is excellent, no matter how tall you are there is ample room in the front seats of the passenger compartment.

The engine compartment is well detailed and the engine is the correct original, engine no. MW 25.  Even the distributor bears the MW 25 designation.  The 7.7 liter inline six-cylinder has incredible power that is delivered through its four-speed manual transmission.  It is surprising how well 137GY handles with its 150” wheelbase.   The front end feels very light and very responsive, thanks to all of the mechanical restoration over the past several years.

This Phantom II comes complete with all of the historical documentation mentioned before, large tools, owner’s manuals and more.

For more information and details, please call, text or email Harry Clark at +1.602.245.7200 or harry@classicpromenade.com.   137GY is available for inspection at our Phoenix showroom. 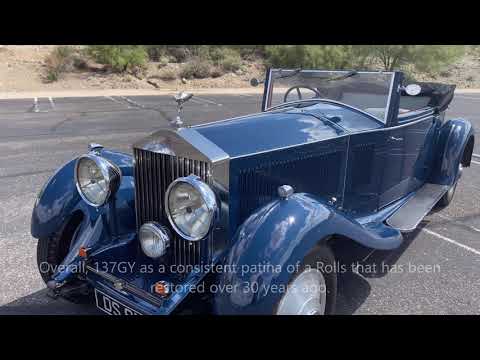 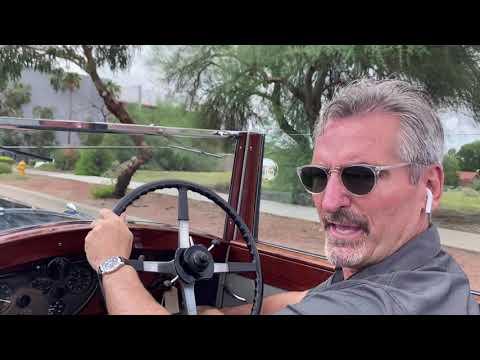 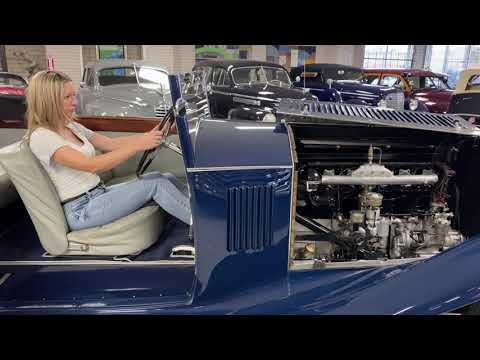