This is a lovely Springfield Phantom that has fantastic provenance. S195FR was first registered with the RROC in 1952, 70 years ago! With $100,000 worth of restoration work performed, it is a wonderful example to add to a collection.

This is a beautiful 1929 Rolls-Royce Springfield Phantom I All Weather Cabriolet that was bodied by Locke and Company and then later updated by Rolleston.   This Town Car was specially ordered new for one of the wealthiest families in America, the Fahnestock’s of the Oppenheimer financial empire.  Ordered on the heels of the Great Depression, this Rolls-Royce cost $20,000 in 1929.  Today, the Town Car presents itself beautifully as an older restoration that can be used for concours or touring.  S195FR has been registered with the RROC for the past 70 years!  S195FR drives very well and would be a delight for touring.

HISTORY:  S195FR comes with a wonderful file history spanning its entire life.  William Fahnestock ordered it from his office at 2 Wall Street and their Manhattan home at 457 Fifth Ave.  According to the extensive correspondence between the Fahnestock’s and Rolls-Royce of America, S195FR was custom ordered to be a special long wheelbase of 150 inches.  This was because S195FR was replacing their 1914 Silver Ghost (37CD), which had its 151 ½ inch wheelbase.  37CD was used as a trade in while specifying that they could continue enjoying it until S195FR was delivered.  Ultimately, Rolls-Royce built S195FR as a special order 148 ½ inch wheelbase (according to letters the front axle was moved back 1.5 inches), which is likely a unique specification.

In 1927, the Fahnestock’s built what is said to be the last of the great Newport mansions, the Charles A. Platt designed “Bois Dore” on Narragansett Avenue.  S195FR was delivered on July 8, 1929 to their estate in Katonah, NY.  The next documented owner was HL Cook from Ohio which submitted his ownership of S195FR to the RROC records on November 3, 1952.  Mr. Cook was a significant collector and an active member of the RROC.  S195FR appeared in the Flying Lady (FL266) in 1956.  By 1963, the Town Car was acquired by Harry TN Graves from Virginia.  Mr. Graves was also a significant collector of Rolls-Royces and owned it for 30 years.  Its last owner, Mr. John B Kinkead of St, Paul, MN acquired it in 1994.

RESTORATION: Mr. Kinkead was a noted collector that enjoyed driving and touring his classics.  S195FR was no exception.  Mr. Kinkead invested about $100,000 in its restoration relying on many of the top names including: Coldwell Engineering, Bill Cooke, Leanard Reece Co in the UK and Odyssey Restorations, Inc in Spring Lake Park, MN.  The restoration was from 2003 through 2009 and resulted in the beautiful example we are presenting today.  The restoration receipts are included in the history file.

S195FR was an early Springfield Phantom I with the smaller grille, manual vertical radiator shutters, drum headlights, dual side mounts and the attractive rounded chromed pipe bumpers.  Being a later Springfield Phantom, S195FR was one of the first Phantoms with chrome rather than nickel and is left hand drive.  In total, 1,241 Springfield Phantom I’s were produced.  The body and fenders are believed to be original to the car, but it is said that in the mid 1930’s it was sent to Rollston of New York to have the original fenders “skirted” to give it a more updated appearance.

EXTERIOR:  The livery is an elegant two-tone blue that is in overall nice enough for most concours events but what we refer to as touring quality.  The paint presents itself with very nice shine and luster but has many small touched up chips and a few small cracks.  The chrome has largely been redone and in very good to excellent condition with some signs of wear.  The black vinyl top looks correct and in very nice condition.  The original trunk with three fitted suitcases is still original and in beautiful condition.   The glass is all excellent having been replaced during the restoration.

DRIVETRAIN:  The engine and engine compartment are very impressive and in beautiful condition.  The engine was replaced with a correct series SPI 7,668 cc six-cylinder inline engine with its 4-speed transmission (Engine No. 23006).  The gauges all appear to work well including the speedometer, oil pressure, temperature, amp meter and fuel gauge.  The clock is not working but is correct and original to the car.  The drivetrain was completely restored during the restoration including the engine, transmission, suspension, Bjur lubrication, radiator, etc.   The chassis is well detailed for a tour car and appropriate for show.  The Phantom drives very well with cool operating temperatures and great oil pressure.  We have serviced the oil, lubricated the chassis and completely serviced the carburetor.

For more details and information please call, text or email Harry Clark at +1.602.245.7200 or harry@classicpromenade.com.  The Phantom I is available for viewing in our Phoenix showroom. 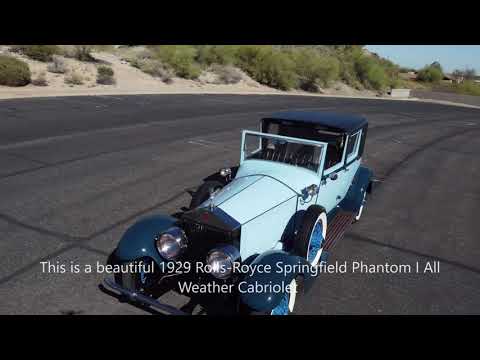 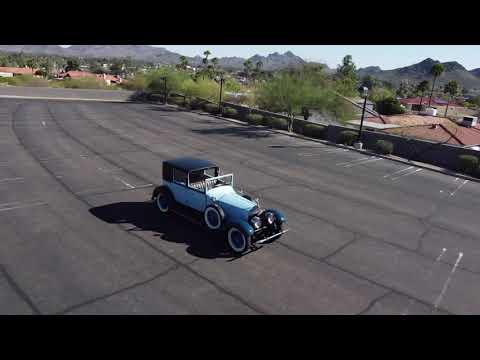 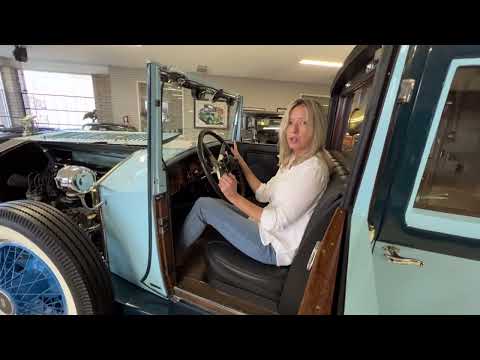