This Marmon has terrific pedigree as a touring veteran as well as an award winning show car. As a close competitor to Duesenberg, Marmon will always be a revered motorcar. The Model 34 set the world record of six days to cross the US, beating the record set by Cannonball Baker!!

PRICE REDUCED $20,000!!  This is a well-known 1922 Marmon Model 34B Touring that is beautifully restored and has been a concours award winner as well as a veteran of numerous tours.  This Marmon appears much sportier than most, with its rear mounted spare and removeable rear windshield.

This is the massive, powerful and lightweight Model 34B that is made mostly from aluminum, having an aluminum engine, manifold, radiator, grill, as well as the entire body.  The Nordyke & Marmon Company was located in Indianapolis and was focused on performance.  Its engineers were well ahead of their time.

This particular example is regarded as one of the most correctly restored in existence.  It was sold new by Horace W. Naylor in San Diego.  Attesting to the fact that this was originally a San Diego car.  Its past owner was Jeff Stumb from Tennessee.  Mr. Stumb served as the Editor for “The Marmon News”, the newsletter for the Marmon Club.  He acquired the Marmon along with his father in 2006.  It had been previously owned by John Bakich from Bakersfield, CA.  Mr. Bakich has been a major collector and tour participant with Horseless Carriage and AACA motorcars for years.

Under Mr. Stumb’s ownership, the Marmon earned its AACA National First and was entered into many local shows, including earning Best of Show.  More importantly, however, it completed numerous long tours including several Glidden Tours and AACA Tours.  It proved itself to be a powerful, comfortable tour car.  According to Mr. Stumb, there is only one other 1922 Marmon Touring known extant.

This Marmon has a cream-colored body complimented with black fenders, grill and trim.  The paint overall is very nice with only a few small areas that have been touched up over the years in places such as the doors and hood.  We love the red painted wheels that add a sporting flair to the livery.  The convertible top is as new and is of high quality.  The rear window features beveled glass.  The convertible top raises and lowers in about a minute and fits snugly.  The rear mounted spare wheel and tire are locked in place with an authentic Marmon lock.  There are no side curtains with this Marmon.

The black vinyl interior is in excellent condition, including the two jump seats, allowing this Marmon to comfortably seat 6-8 people.  The wood dash is in very nice condition as are the instruments, controls and steering wheel.  All are authentically presented.  Inside the driver’s door is a locked compartment with a full set of tools.

The engine compartment is where the magic of the Model 34B resides.  The aluminum engine is a piece of automotive history.  Being an overhead valve straight six with 340 CID, this Marmon has great power and performance.  Its three-speed transmission seems solid and confident.  The engine compartment is well detailed and correct, including its air compressor.  Dual mechanical rear brakes provide a reasonable semblance of stopping power.  Planning well ahead is always advised in pre-1930’s motorcars.  The chassis is beautifully detailed and completes the restoration.

For more information, please call, text or mail Harry Clark at +1.602.245.7200 or harry@classicpromenade.com.  The Marmon is available for inspection at our Phoenix showroom. 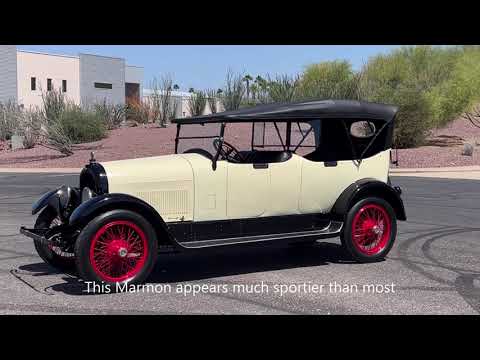 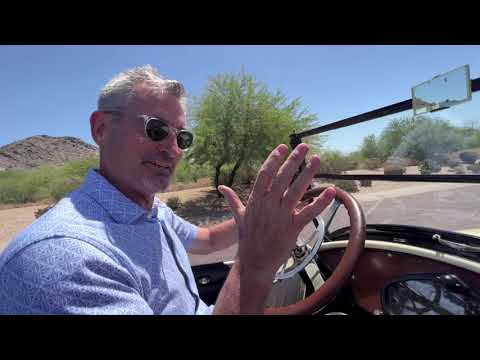 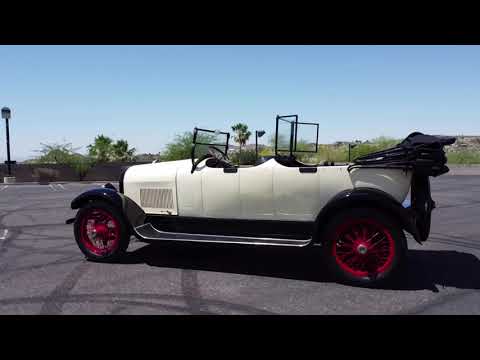